'In case any mishap takes place': UP govt employees wear helmets, work in building with holes in roof 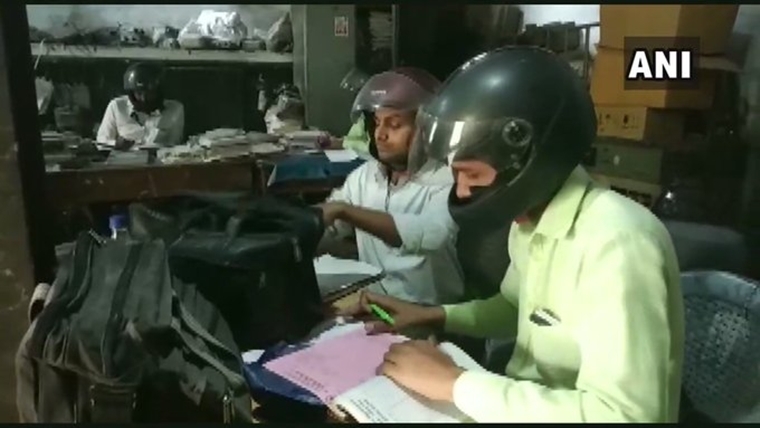 Government employees in UP wear helmets to work | Photo by ANI

Uttar Pradesh: Photographs of employees wearing helmets inside a government office in Uttar Pradesh have gone viral on social media.

Employees of the electricity department in Banda district were photographed working in an office located in a dilapidated building. The roof of the room has developed several holes as the plaster has come off and a pillar in the middle of the room is holding the roof up.

"We wear helmets at work to protect ourselves in case any mishap takes place. We have informed the seniors several times about the condition of the building, but no one has taken any action in the matter. Perhaps, they are waiting for some of us to get killed before the repairs begin," said one of the employees. He said that during the rainy season, the employees bring umbrellas because the roof leaks.

Banda: Employees of electricity dept wear helmets to protect themselves from any untoward incident while working in dilapidated office building. One of the employees says,"It's the same condition since I joined 2 yrs ago. We've written to authorities but there is no response". pic.twitter.com/S3MYarY6zi

The furnishings too speak loudly about the condition of the office. There are no drawers and cupboards to keep the documents and files can be seen lying in cardboard boxes.

None of the senior government officials were willing to comment on this.

Many Twitter users have expressed their outrage at the working conditions, with some bringing up construction initiatives such as the plan to create a 221-metre tall statue of Lord Ram in Ayodhya. One user wrote that this was how "cost-cutting should be applied in our country".

This is how cost cutting should be applied in our country.

Thanks Yogi ji for this 🙏

From @rashtrapatibhvn to @PMOIndia and others of India's ruling classes, a culture of shirking concerns till they deteriorate into
crumbling, intractable crisis. @iNSAAjitDoval

Shameful... Hope @ptshrikant @CMOfficeUP and @myogiadityanath ji are listening...
Pl. pull up the authorities who are not responding to such requests...