The chopper was travelling from Sulur Air force base to the Defense Services College (DSC) at Wellington when it crashed.

Tamil Nadu Chief Minister M.K. Stalin on Wednesday has left for Coimbatore en route Coonnor to visit the site of the crash of the IAF helicopter, carrying Chief of Defence Staff Gen Bipin Rawat and others.

He will be reaching Coimbatore in an aircraft and from there he will reach Coonoor by road and is likely to reach the place of the helicopter crash by evening.

An Indian Air Force M17 helicopter, in which Gen Bipin Rawat, his wife Madhulika Rawat and 12 other officers and staff were onboard, had crashed at Coonoor near Ooty.

The chopper was travelling from Sulur Air force base to the Defense Services College (DSC) at Wellington when it crashed. According to the information available, the chopper took off at 11.47 am from Sulur and crashed at 12.20 pm.

The chopper reached Wellington by 12.10 pm but was not able to land and was returning back to Sulur where it crashed.

Tamil Nadu Forests Minister K. Ramachandran, who has reached the spot, told IANS that: "I am here on the instructions of Chief Minister M.K. Stalin to oversee the rescue operations. 14 people were in the helicopter but airforce has not given further details. Thick mist that engulfed the area resulted in the crash, according to Air Force." 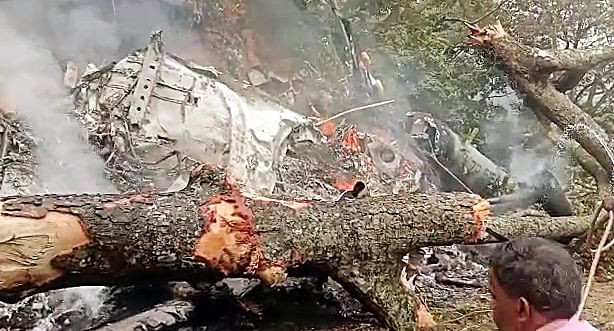