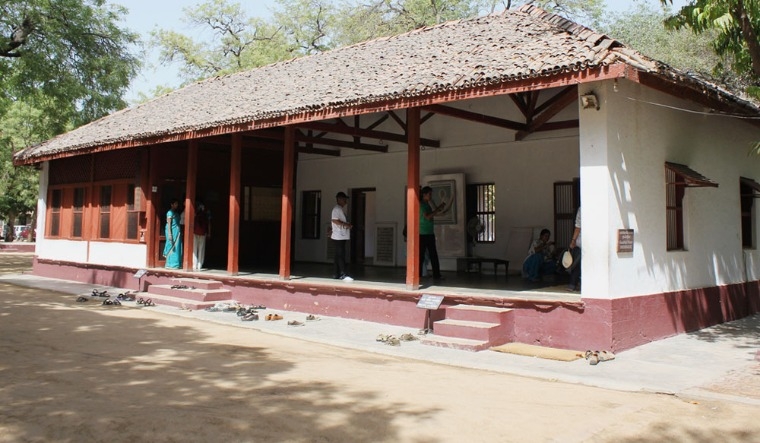 Ahmedabad: Even as there are protests across the country against any effort by the present BJP regime to redevelop the historic Sabarmati Ashram, the Gujarat Government has claimed it is not redevelopment but restoration and it will ensure that the ethos of the original ashram is preserved.

This is the first time that the Gujarat Government, which is implementing this centrally funded Rs 1,200 crore project, has “officially” made public the plan to redevelop the Gandhi Ashram, popularly known as Sabarmati Ashram.

The Chief Minister’s Office (CMO) of Gujarat tweeted on Monday evening, CMO Gujarat said the entire project was being funded by the Centre and managed by the State Government in consultation and consensus of all stakeholders.

The tweet came when several people associated with Gandhian institutes have embarked on “Sevagram-Sabarmati Sandesh Yatra”. The march that started from Sevagram in Wardha is expected to reach Ahmedabad on October 23. The marchers’ demand is that the legacy of the freedom movement and Gandhi’s heritage should not be tampered with.

In August, more than 130 persons, including Gandhians, had come out against the move of restoration and redevelopment by terming it as a “second assassination”. Gandhi stayed here from 1917 to 1930.

The redevelopment plan has been prepared by HCP Design, Planning and Management Private Limited, headed by Bimal Patel, who is also executing the Central Vista Project.

The audio-visual clip states that the “austere, simple and authentic architecture of the ashram was the very embodiment of Mahatma Gandhi’s values and philosophy.”

It concedes that today’s Gandhi Ashram Memorial is (already) “deeply inspiring but it has been long felt that much remains to be desired.”

It also states that originally the ashram was spread over 128 acres with 68 buildings and over a period of time, it now spans just over 5 acres.

The CMO, Gujarat (read K Kailashnathan, Chief Principal Secretary to the CM), said all this would be restored in a way that preserves the ethos of the original ashram.

“The Ashram Road will be severed and diverted, and the ashram will be expanded to include all the buildings that were present during Gandhi’s times,” the tweeted video said.

Buildings and activities that are not congruent with the proposed memorial will be moved to satellite campuses adjoining the ashram.

Ashramwasis, who are tenants of various trusts, will be given houses with upgraded facilities within 50 meters of the current dwellings. It said that those who decide to move out will be given a “generous compensation” of four-bedroom homes, which are ready to occupy.

Original buildings of the ashram will be carefully restored and brought alive for everyone to visit, it said, adding that few new museums and exhibits will be added to display Gandhi’s life and work.

It also said that the archives and library will be better housed and facilities created for research and training. The Chandrabhaga rivulet near the ashram will be converted into a modern waterway and historic Dandi Bridge will be restored.