From crime to encounter: A timeline of Hyderabad vet rape-murder case

Hyderabad: Police at the site of an alleged encounter, where four accused in the rape and murder of a veterinary were shot dead, on the outskirts of Hyderabad, Friday, Dec. 6, 2019. | (PTI Photo)

All the four accused in the rape and murder of a woman veterinarian in Hyderabad, were killed in an encounter with police on Friday morning.

The four men, all lorry workers, aged between 20 and 24, were arrested on November 29 for allegedly raping and killing the woman by smothering her and later burning her body. They were in remanded to 7 days' judicial custody. The gang rape-and-murder triggered a nation-wide outrage with the public and lawmakers demanding speedy punishment to the perpetrators.

The gang rape-and-murder triggered a nation-wide outrage with the public and lawmakers demanding speedy punishment to the perpetrators. The state government had ordered setting up of a special court (fast track) to expedite the trial. But, on December 6, the four men were killed in a police encounter at the same spot where the crime was committed. The Cyderabad Police said that the accused snatched weapon and fired on police and hence, in self-defence, the police fired back, in which the accused were killed.

Here's a timeline of the case

The investigations have revealed that the victim had parked her two-wheeler at the toll gate around 6.15 pm and hired a cab to Gachibowli. She returned around 9 pm to find that her bike had a flat tyre. At 9.22 pm, she called her sister to say she was scared and asked her to keep speaking to her.

The police found a charred body near Shadnagar and later it was identified that the body was of the missing Hyderabad veterinarian.

Police arrested four accused, by Cyberabad Police in connection with the case. The accused had been identified as Mohammed Arif, and Chintakunta Chennakeshavulu, both lorry drivers and Jollu Shiva and Jollu Naveen, both lorry cleaners. The accused were charged under IPC sections 302 (murder), 375 (rape) and 362 (abduction).

The accused were later sent in 14-day judicial custody, and lodge them in high-security cells at Cherlapally Central Prison. They were later shifted to Chanchalguda Central Jail. A large number of people stage a protest outside Hyderabad’s Shadnagar police station. Later, three police officials were suspended for negligence in duty. 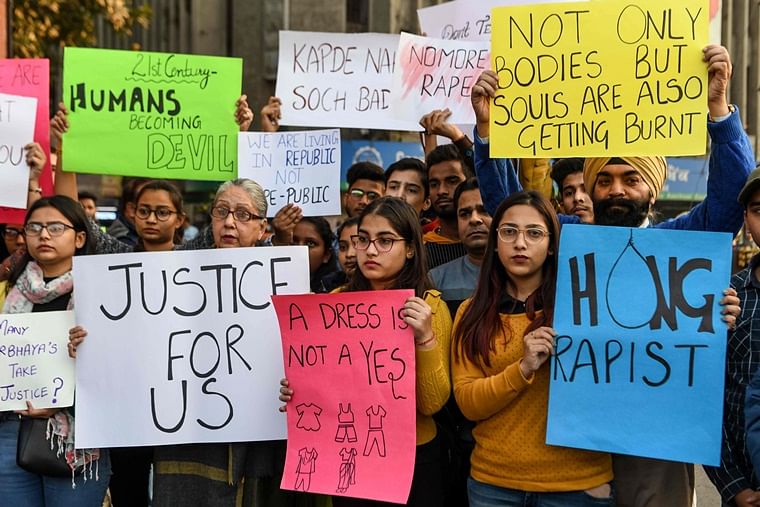 Telangana Chief Minister K Chandrashekar Rao calls the incident “ghastly” and assures that the family of the veterinarian will be provided with all kinds of assistance.

The Telangana government issued orders for setting up a fast track court to try the four men accused of the gang rape and murder of a woman veterinarian near here last month, even as protests continued over the incident here and other parts of the state. The government designated the court of First Additional District and Sessions Judge in Mahabubnagar district as special court for speedy trial of the case. Chief Minister K Chandrasekhar Rao had on Sunday announced setting up of a fast track court for expeditious trial of the case.

All four accused in the rape-and-murder case of a 25-year-old woman veterinarian near here last month were killed in an exchange of fire with police on Friday morning, police said. The incident took place around 6.30 am when the accused were taken to the site of the offence for reconstruction of the scene of the crime as part of the investigation.