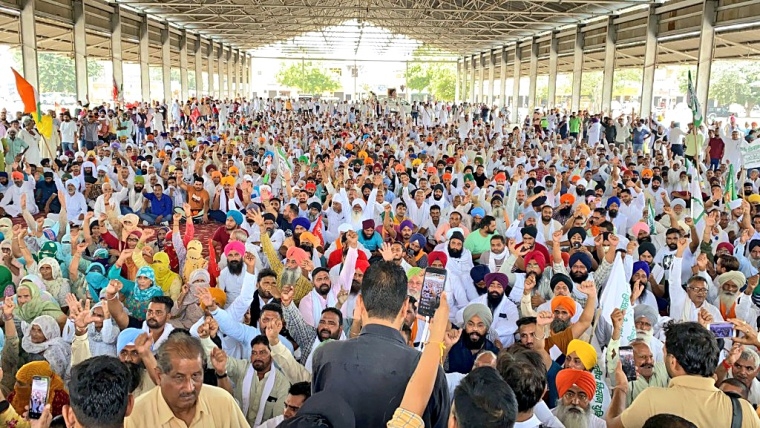 New Delhi: The Supreme Court on Friday pulled up Kisan Mahapanchayat for approaching the court over satyagraha at Jantar Mantar and said that the protesting farmers have "strangulated" the entire city and now want to come inside the city.

The Kisan Mahapanchayat is a body of agricultural community and farmers which is protesting against the three farm laws.

A Bench headed by Justice AM Khanwilkar said there is no purpose of protests if you come to courts. The apex court noted that protesting farmers are obstructing traffic, blocking trains and national highways and said that this "coaxing should stop".

The Bench asked Kisan Mahapanchayat, seeking permission to allow to hold Satyagrah at Jantar Mantar, to file an affidavit that they are not part of the farmers protest blocking the national highways by Monday.

"You want Satyagraha, no problem. But why have you approached court? And if you have approached the court, then trust the court. The challenge to three farm laws is already pending before the court then what's the need of Satyagraha? Once you have made up your mind and approached the court then what is the need of protest? Are you protesting against the judicial system?" asked Justice Khanwilkar from Advocate Ajay Choudhary appearing for the organisation. "On one hand you have strangulated the entire city and now you want to come inside the city and protest?" the Bench further said. "You have a right to protest, but you cannot destroy property. Are the residents around, happy with the protest? Whether you can take permission from the residents? This business should stop. Every citizen has the right to free movement. You are obstructing security and defence personnel. This was in the media. All this should stop. There is no point in protest once you come to the court challenging the laws," it further asked Kisan Mahapanchayat's counsel.

Kisan Mahapanchayat told the Bench that it is not part of the group of protesters which have blocked the roads in Delhi-NCR and also the roads were blocked by the police and not the farmers.

The apex court then asked the organisation to file an affidavit stating it was not part of farmers protest blocking the national highways. The Bench posted the matter for hearing on October 4.

It also asked the counsel to serve an advance copy of the petition on the Attorney General for India KK Venugopal.

'Holding a satyagraha our right'

Kisan Mahapanchayat, a farmers group, has moved the top court seeking directions to the authorities to allow it to stage peaceful and non-violent 'Satyagraha' at Jantar Mantar, Delhi.

It sought direction to the Central Government, Lieutenant Governor and Commissioner of Delhi Police to provide space to at least 200 farmers or protestors of the Mahapanchayat at Jantar Mantar for organising 'Satyagraha' and to not stop them from proceeding towards Jantar Mantar.

Denying the permission for holding peaceful, unarmed and non-violent Satyagraha at the designated place at Jantar Mantar is in violation of the basic democratic rights enunciated as fundamental rights under the Constitution of India, said Kisan Mahapanchayat.

It said that the action of authorities is "discriminatory and arbitrary" as permission to protest has been granted to another farmer body, Sanyukt Kisan Morcha, while denying them to organise staggered Satyagraha. FPJ Legal: How can highways be blocked perpetually during farmers protests, asks SC