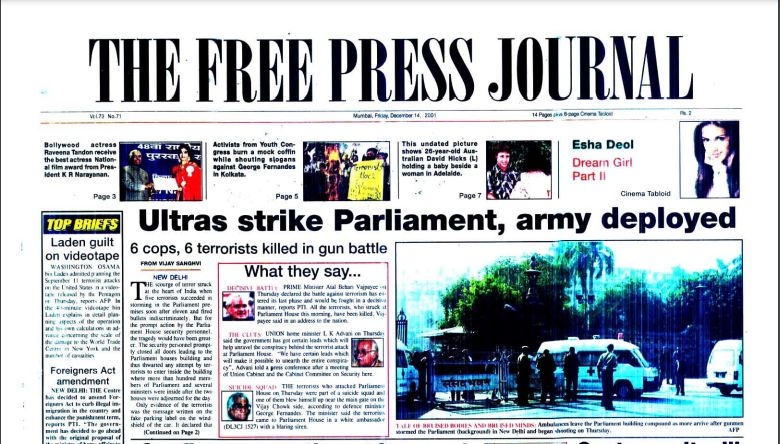 20 years down the lane, India witnessed one of its terror in the history of the official Houses. It was a typical Delhi winter morning on December 13, 2001 which marked the Indian Parliament attack.

The attack happened just about 40 minutes after Parliament was adjourned and with 100 members present in the building. Five heavily armed terrorists gushed inside the Parliament complex. They no sooner opened fire indiscriminately this day in 2001, killing as many as 14 persons, being the security force personnel and a civilian.

As the country was in shock post the happening that compromised the secured zone of the country officials, the Free Press Journal took to report the details to its readers.

The front page of the publication had the headline focused on the 2001 Parliament attack, carrying some quotes from the officials who experienced the fierce attack. The headline read, 'Ultras strike Parliament, army deployed'. We reached out to the then Prime Minister Atal Bihari Vajpayee, Union Home Minister L K Advani and Defense Minister George Fernandes to get to the crux of the morning attack.

Take a look at the coverage of Indian Parliament Attack 2001, here: