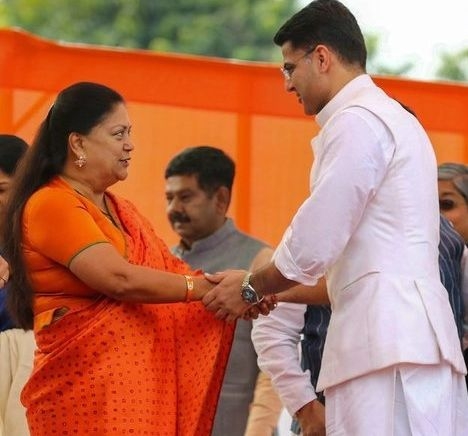 Jaipur: Plans for tours across Rajasthan by dissident leaders of the Congress and BJP parties in the coming months have created a buzz in the political circles. Former deputy CM Sachin Pilot recently visited four districts while Ex-CM Vasundhra Raje is planning to go to Udaipur and Ajmer division in September.

With the COVID-19 cases in the state under control, these are being planned in the name of condolence visits to the families of leaders and workers who have lost their family members during Covid or for some religious and social events, said sources.

Pilot got a grand welcome throughout his road trip to Barmer. From Jodhpur, he went to Alwar and Dausa to attend some religious events and good gatherings were seen in both the districts. Sources close to the Pilot camp says that now he is planning to go to Ganganagar and Hanumangarh and some other districts in the coming months.

Even former CM Vasundhara Raje received good support from her followers when she visited flood-affected areas of the Kota division and her constituency recently. Now as per reports she is planning to go to the districts of Ajmer and Udaipur division to pay condolence to the families of some of the party leaders and workers who are close to her. She may also go to some religious places in these areas.

Sources say that her visits will have a significant political impact on the internal politics of the party as two assembly by-elections are to be held in the Udaipur district in the coming months.

These tours are being considered as an exercise to gear up support for the two dissident leaders. ‘If the tours will continue like this, the internal politics of both Congress and BJP in Rajasthan will reach boiling points much before elections,’ said a leader close to the party leadership in BJP.