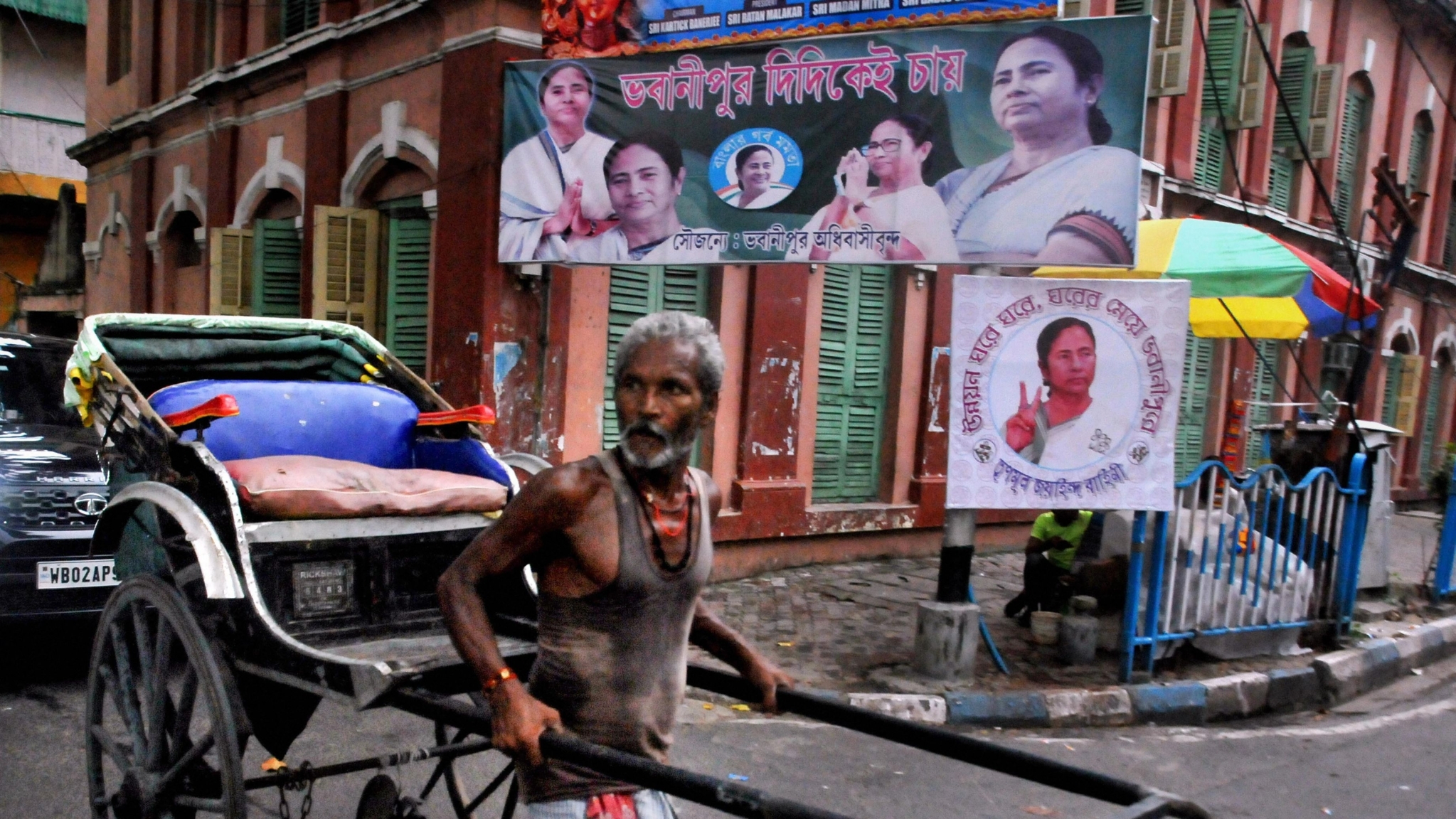 Kolkata: A man pulls his rickshaw in front of the hoardings of West Bengal Chief Minister Mamata Banerjee, put up by TMC workers ahead of Assembly By-election at Bhabanipur in Kolkata | (PTI Photo)

Kolkata: The proactive attitude of the central agencies like the ED and CBI, which have issued summons to several Trinamool Congress leaders just before the crucial Bhabanipur bye-election has led to the ruling party calling it a political vendetta. The rival BJP leaders asked the ruling party to move the court against it.

In the last few days, several Trinamool congress leaders have been summoned by either the Central Bureau of Investigation (CBI) or the Enforcement Directorate (ED) in different cases.

Here is who has been summoned so far

On September 6, the ED interrogated All Indian Trinamool Congress General Secretary Abhishek Banerjee for nine hours in the coal smuggling case. He has been summoned again on the 21st of this month. His wife Rujira Banerjee was also summoned, but she has refused to go to Delhi to appear before the ED. Instead, she has requested an interrogation at home.

State Law Minister Moloy Ghatak was asked to come to Delhi and appear before the ED in the same coal smuggling case, but he refused to go and asked the probe agency to come to Kolkata to record his statement. He has told them that they can record his version through video conference.

Another cabinet minister, Partha Chatterjee, was also summoned by the CBI in connection with the I-Core chit fund case. Chatterjee, who is also the commerce and industry minister of the state, said that he would not be able to appear before the CBI and instead asked the central agency to come and record his statement in the state. Officers of the probe agency, however, came on Monday and interrogated him for two hours.

Chief Minister Mamata Banerjee lambasted Prime Minister Narendra Modi and Home Minister Amit for summoning Abhishek Banerjee for consecutive two days. "They have interrogated him for nine hours and then again the next day they are calling him. We cannot be threatened. We are not Congress or Akhilesh Yadav or Sharad Pawar. We will fight it out politically," she said in a party's workers' meeting.

The series of summons and consequent interrogation has sparked political controversy in the state. Trinamool Congress spokesperson Sukhendu Sekhar Roy said, "This is nothing but political vendetta. They can't defeat us politically and so they are no using the central agencies to scare us but they cannot cow us down".

The BJP was quick to respond. "We don't do this kind of politics. They might be doing this and so they are worried. If they think it is a political vendetta, they are free to move the court. No has stopped them from going there,a senior BJP leader Samik Bhattacharya said.

Former CPI(M) MLA and veteran leader Tanmoy Bhattacharya said, "They are scared of these agencies because they know that they have done the wrong thing. From where did a Trinamool Leader gather 1,251 crore. He will have to answer the question. He should have been behind the bars but unfortunately he is now ruling the state".