The Election Commission of India on Tuesday issued a notification for the election of the Vice-President. The voting will take place on August 6.

The notification was issued setting in motion the process of filing nomination papers by candidates.

The term of incumbent M Venkaiah Naidu ends on August 10 and the next vice president will take oath on August 11.

Here's all you need to know about the Vice-President election:

The scrutiny of nomination papers will be done on July 20 and the last date for withdrawal of candidature is July 22.

The electoral college in the vice-presidential polls comprises a total of 788 members of both houses of Parliament. Since all the electors are members of Parliament, the value of the vote of each MP would be the same -- one -- the EC said in a statement issued on June 29.

The vice president is also the chairperson of the Rajya Sabha.

The election is held in accordance with the system of proportional representation by means of a single transferable vote and the voting is held by secret ballot.

There is no concept of open voting in the election and showing the ballot to anyone under any circumstances in the case of presidential and vice-presidential elections is totally prohibited, the EC had cautioned, adding that the parties cannot issue a whip to its MPs in the matter of voting.

A candidate can file a maximum of four nomination papers. The security deposit for the election is Rs 15,000.

The BJP-led National Democratic Alliance (NDA) has a clear edge in the election, in which the members of Lok Sabha and Rajya Sabha, including the nominated ones, are eligible to vote.

Political parties are yet to name their candidates for the election.

Read Also
Vice-President election to be held on August 6 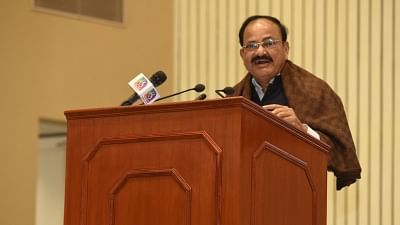