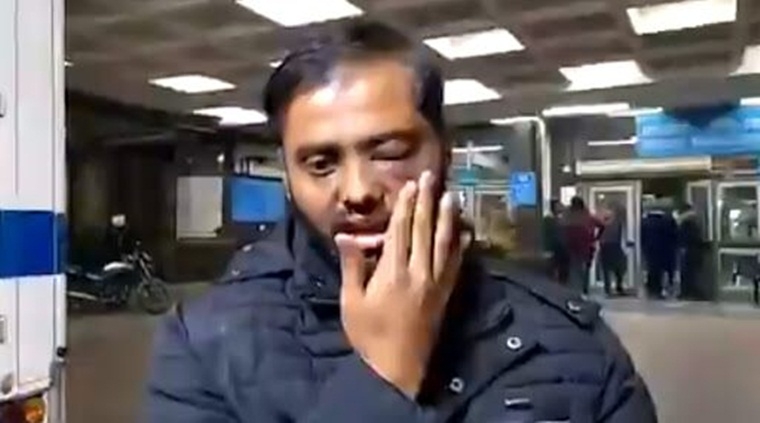 New Delhi: Mohammad Minhajuddin had come to Delhi last year with a dream of starting his law practice in the national capital, but on December 15 he lost vision in one eye allegedly in police action in the Jamia Millia Islamia library.

Minhajuddin, an LLM student, now wants to go back to his hometown in Bihar after completing his studies as he says he doesn't even feel safe in his university campus anymore. He says his faith in law and order has been shaken. "What was my fault? I was studying in the old library in a reading room reserved for MPhil and PhD students. We had locked it after learning that police entered the campus, but they barged inside and started batoncharging students," he recalls.

On December 15, the police stormed inside the university campus to nab ''outsiders'' who were involved in arson, but they denied lathicharging the students. Minhajuddin says students pleaded with the police saying they were not involved in the protest against the amended citizenship act but they did not pay heed. "They deliberately entered the library. The protest was happening outside Gate Number 7 which is on the other side of the road. I had not participated in the protest but I was hit brutally," he claimed. The student, who also sustained a fracture on one of his fingers, questioned the security of the university and how it failed to protect students. "Doctors said there is a possibility of infection in my other eye as well. So I have been taking care by using a sanitiser to clean my hands and keeping everything clean around me," he adds. Minhajuddin says after what he went through, he will never advise anyone to study in the library.

"I have not been to the campus after the incident, I am scared. I will never be able to enter the library without fear. I do not feel safe in my campus," he says. His parents, who are here from Bihar, wanted him to return home but he refused. "I will complete my PhD and then start my law practice in my hometown. Earlier, I wanted to practice in Delhi since the Supreme Court is here along with six district courts and great career opportunities. But after this, I do not like working here," he says.

It was only last year that Minhajuddin came to Delhi and today he "regrets his decision" as he says, "I did not know Delhi is such an unsafe city. I made a mistake coming here for my studies." Minhajuddin said university vice-chancellor Najma Akhtar spoke to him and assured him of all help from the university's end, but the Jamia administration did not support him during his ordeal.

"She interacted with me over a video call and that information was circulated everywhere, but that was it. I have been managing everything with the help of my friends," he says. AAP MLA Amanatullah Khan had announced Rs 5 lakh and a job at the Delhi Waqf Board for the Jamia student. "Yes, he offered me a job but I have learnt that it is not a permanent position. I want some job at the university level only," he says.