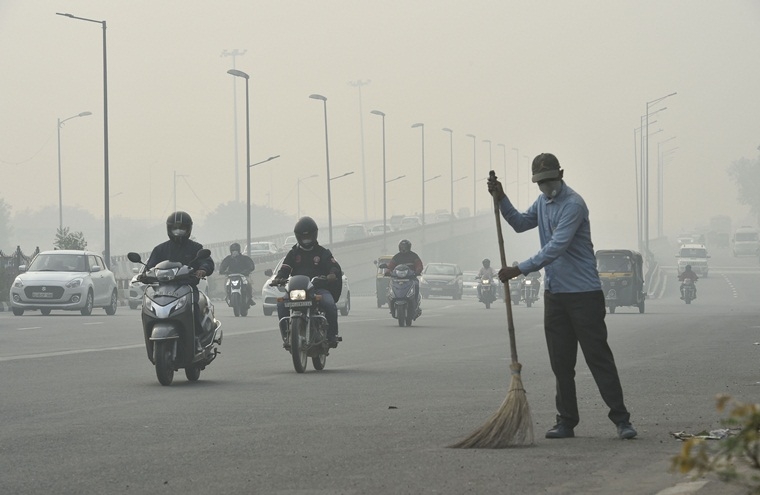 The national capital recorded its best air quality in 12 days as moderate winds continued to counter the effect of stubble burning on Monday. But the air pollution is not only affecting people in Delhi, even Flight disruptions, fewer tourists, lost work hours and missed school days may be adding up for an economy grappling with a sharp slowdown.

According to Bloomberg, India's losses from air pollution increased more than four times to $560 billion between 1990 and 2013, according to the World Bank, which attributed the economic burden to the rising costs of public health-care and workforce disruption. Pollution is now being counted among the hidden costs like repelling top corporate talent, according to analysts and industry lobby groups. Hemant Shivakumar, a New Delhi-based senior analyst at Control Risks that advises clients on political and security risks, told Bloomberg that, "This feeds into the broader economic environment. If the air pollution escalates year after year and there's no response then it's likely to send investors a different message."

However, weather experts said, pollution levels are likely to enter the 'severe' zone again on Thursday due to a gradual dip in wind speed over the next two-three days. The overall air quality index in Delhi stood at 214 on Monady at 4pm, a notch below Sunday's AQI of 215. Jahangirpuri was the most polluted area with an AQI of 311 and Ayanagar (98) the least polluted, according to the Central Pollution Control Board data. Neighbouring Ghaziabad (256), Greater Noida (218), Noida (227) recorded their air quality in the 'poor' category, while Gurgaon's AQI (138) remained in the 'moderate' category for the second consecutive day.

"It affects us all," Frank Hans Dannenberg Castellanos, the ambassador of the Dominican Republic to India and the dean of the Diplomatic Corps, was cited as saying by the Press Trust of India. "This is a problem of major proportions to be solved" by the city and the federal government.

"There are a number of economic detriments linked with Delhi's ongoing pollution crisis," said Natasha Mudhar, the chief executive of London-based business consultancy Sterling Global, and Founder of The World We Want, which is working toward achieving the United Nations' Sustainable Development Goals. "Employers in the city are finding it increasingly hard to retain top-level executives and highly skilled workers who are looking to get out of the city and away from the hazardous air," Natasha Mudhar told Bloomberg.

Meanwhile, the Supreme Court-mandated anti-pollution authority, EPCA, on Monday asked Delhi and NCR states to step up surveillance and enforcement to check local sources of pollution and crop burning in view of the predicted dip in air quality. The Supreme Court had on November 4 banned construction and demolition activities in the region till further notice.