The letter was written to a senior Maoist in which it was mentioned that several PLGA members including top cadres were infected of Covid-19, the IG claimed

Raipur: After Covid-19 cases started receding in urban areas of the state, it has started widening its tentacles in rural areas of Chhattisgarh including Bastar. Around 10 members of banned CPI Maoists guerrillas succumbed to injuries due to COVID-19 infections in the last few weeks, said Bastar police. Now, it has started speedily spreading among the naxals.

Team of security forces seized a huge cache of daily use items including a letter in a raid conducted on a Maoists camp in the jungles of Palnar under limits of Gangulur police station, Bijapur, Sundarraj P, Inspector General (IG) of Bastar police said on Tuesday. The letter was written to a senior Maoist in which it was mentioned that several PLGA members including top cadres were infected of Covid 19, the IG claimed. It includes the names of the cadres killed by coronavirus.

Around 10 Maoists including top cadres died due to infection, Sundarraj said. To save their lives several Maoists also quitted the organization and translocated themselves. We are trying to identify them, the IG added.

In addition to it Dantewada SP Abhishek Pallava claimed that around 100 Maoists cadre are infected with the deadly virus and battling for their lives.

He urged the Maoists to surrender, the police will provide them full medication and help them to recover and rehabilitate. 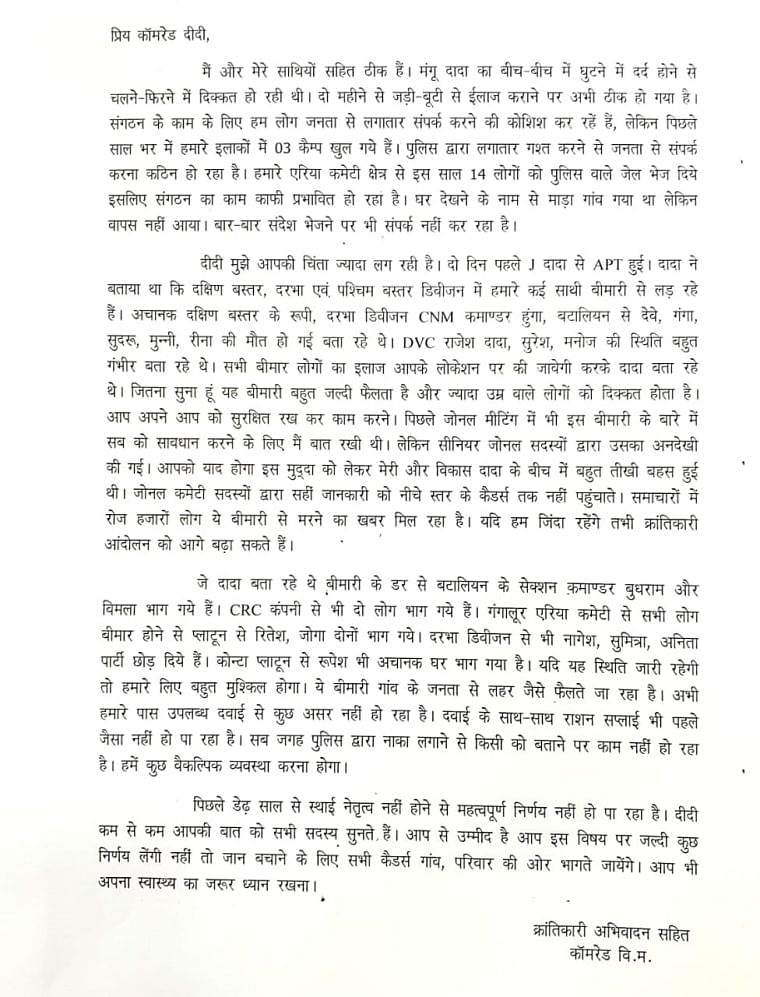 The movement and mixing with the rural tribal inhabitants living in the outskirts may risk their lives, making the situation worrisome, the SP said.

Meanwhile, IG Bastar alleged that top Maoists are not disseminating the correct information in a proper way amid villagers and small cadres they did last year, may lead to catastrophe in Bastar. Naxals have also looted Covid 19 related medicines and vaccines from Konta and Dornapal areas of Sukma, however these things are yet to be confirmed by the police.