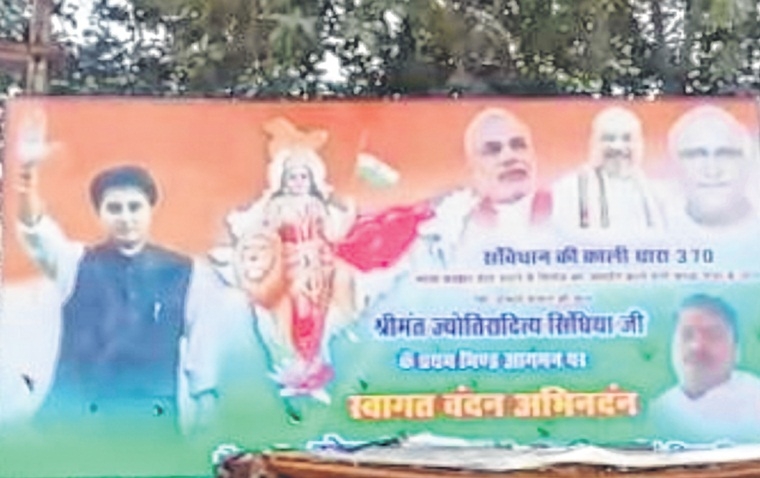 Bhopal: A poster put up by a BJP leader welcoming AICC general secretary Jyotiraditya Scindia during his visit to Bhind has created ripples in political circles

In the poster, Scindia is sharing space with PM Narendra Modi and BJP national president Amit Shah. Hridyesh Sharma had put up the posters to commend Scindia for backing abrogation of Article 370 by the Central government.

Following abrogation of Article 370 in August, Scindia had tweeted his support for the decision in national interest. His stand was in stark contrast to Congress’ official stand. During the visit, Scindia also obliquely targeted Congress-led state government, thus lending further impetus to the political buzz about his future moves.

The former Guna MP had lamented that the farm loan waiver promise of the Congress had not been fulfilled on the ground. “We promised to waive farm loans up to Rs 2 lakh. However, only loans up to Rs 50,000 have been waived. The state government must waive loans up to the promised Rs 2 lakh,” he said at a party programme. Reiterating the demand for compensating rain and flood-hit population, Scindia said “The situation in some areas ravaged by rain and floods is really bad. No survey is required to compensate those affected by it. Cent percent compensation needs to be made in these areas. I’ve told people that in this time of difficulty, I’m with them, but the government too will have to stand by them,” said Scindia. Scindia’s statements have given much needed ammunition to the opposition BJP to fire salvos at the Kamal Nath-led government in the state.