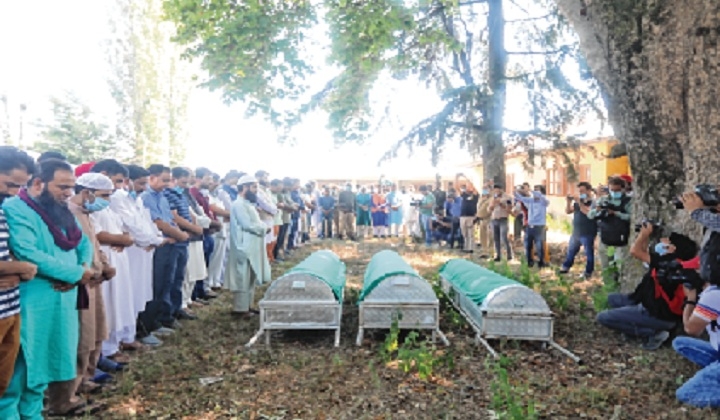 Workers of the Jammu and Kashmir unit of the BJP and its youth wing BJYM on Thursday held protests against the killing of party leader Sheikh Wasim Bari, his father and brother in a terrorist attack in Bandipora district of north Kashmir.

Blaming Pakistan for spreading terror in the Valley, the protesters raised slogans against the country and burnt its flags at several places across the union territory even as a BJP leader demanded a probe into the security lapse.

Led by Yudhvir Sethi, J&K BJP vice president, workers assembled near City Chowk area of Jammu and demanding terrorists involved in the killings be eliminated. "The anti-national forces are hell bent to ruin the peace in Kashmir Valley which has seen a new phase of development since PM Modi has taken the reins of the government at the Centre. Such gruesome acts are meant to scare the people of Kashmir Valley, who are now extending support to the policies and programmes of the BJP at the Centre,” Sethi said.

Terrorists are trying to vitiate the peaceful atmosphere and are targeting political leaders who have become soft targets as they are working extensively in far off and interior places, Sethi said.

BJP leader Sheikh Waseem Bari, his father Bashir Ahmed and brother Umar Bashir were injured when militants opened fire on them outside Bari's shop near police station Bandipora at around 9 pm on Wednesday. They were rushed to the district hospital where they succumbed to injuries.

Sethi said terror perpetrators are not the well-wishers of Kashmiris as they are not able to stomach the abrogation of Article 370 and resignation of separatist leader Syed Ali Shah Geelani from the Hurriyat Conference who he blamed for pushing the Valley into terror and violence. The protests were held by BJP district units in Samba, Udhampur, Kathua and Reasi in Jammu. The Bharatiya Janata Yuva Morcha (BJYM) too held a protest in Jammu.

BJP leader Munish Khajuria said the brutal killings by anti-national elements is another example of cowardness of Pakistan and its sponsored terrorist outfits.

Meanwhile, the funeral of former BJP Leader Wasim Bari, and his father and brother were held in Bandipora on Thursday.

In another development, the proscribed terror outfit Lashkar-e-Tayyeba (LeT) claimed that it was behind the killings, Inspector General (IG) Kashmir Vijay Kumar said on Thursday.

The IG told the media after visiting the home of the slain leader in Bandipore along with senior police officials.

“After watching the CCTV footage it looks that this a pre-planned attack,” he said.

Jammu: A woman, who was injured in heavy Pakistani shelling in civilian area along the LoC in J&K’s Poonch, has succumbed, officials said on Thursday. They said Pakistani troops shelled mortars and fired with small arms in three sectors of Qasba, Kirni and Degwar, in violation of a ceasefire agreement. The Indian troops, guarding the borderline, retaliated resulting in a gunfight. One woman, who was injured in shelling by Pakistan on Lanjote village of Poonch district on Wednesday, succumbed on Thursday evening in the hospital. A 65-year-old woman was killed and some others were injured on Wednesday as Pakistan violated ceasefire by targeting forward posts and villages along the LoC in different sectors in J&K.