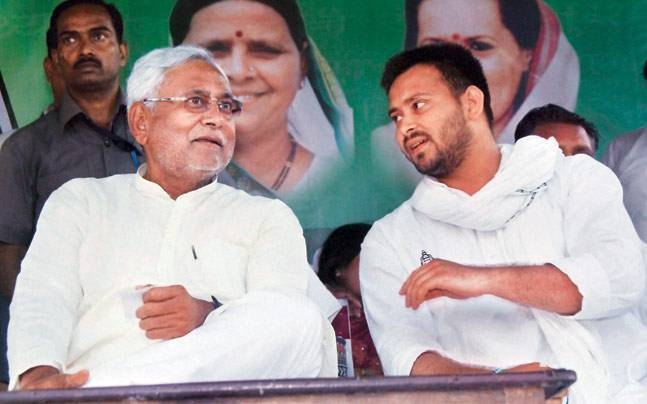 Patna: Bihar Chief Minister Nitish Kumar on Tuesday asked the chief secretary and director general of police to investigate the presence of empty liquor bottles in the Bihar legislature premises.

Nitish Kumar was reacting to the charges of the leader of opposition and RJD leader Tejashwi Prasad Yadav who claimed that liquor bottles were found in the parking space of the legislature premises today.

He visited the parking space during lunch hours and found many empty liquor bottles and raised the issue in the post-lunch session and alleged that prohibition was a farce as liquor bottles were found in the premises, 100 metres away from the House.

Nitish responded to the charges of Tejashwi and requested the Speaker of assembly Vijay Kumar Sinha to order for an in-depth investigation. "It is a serious issue, how liquor bottles reached the legislature premises!" the CM said.

He said on his part he would ask chief secretary and DG of police to immediately start investigation .

"CCTV installed in the legislature premises would help investigation," said a security official of the Bihar legislature.

Last week, entire Bihar had taken an oath for total prohibition under the leadership of the chief minister.

There is total prohibition in Bihar since April, 2016. 'There would've been an improvement, if CM...': Bihar LoP Tejashwi Yadav slams Nitish Kumar after...