Australia has said that it shares a challenging strategic environment in the Indo-Pacific with India and the decision to join AUKUS has been taken after deep consideration.

New Delhi: Australia has said that it shares a challenging strategic environment in the Indo-Pacific with India and the decision to join AUKUS has been taken after deep consideration.

Australian envoy to India Barry O'Farrell said that China is undertaking the biggest military modernisation in the world. He underscored that Australia is striving for inclusive regional order in the Indo-Pacific where all small and big countries play their role and just one country cannot dominate. He was alluding to China.

"Great power competition is intensifying, territorial tensions in the South China sea, Taiwan and elsewhere are becoming more challenging and military capability is proceeding at an unprecedented rate. It is driven by China which is where largest military modernisation programe is underway in the world," he said.

So strengthening Australia's nuclear capability through nuclear submarines will form part of Australia contribution to a secure and prosperous Indo-Pacific, he said.

"It improves Australia's strategic weight and it allows us more effectively to shape our region's future trajectory. It's a decision Australia has taken in response to changing strategic circumstances, but it is also part of our relationship bilaterally, trilaterally and quadrilaterally across the region," the envoy said.

Australia defended its move to acquire nuclear submarines. Barry O'Farrell said, "Nuclear powered submarines will provide Australia capability that is good for its defence because they can travel faster, can travel for a longer range, have a greater power and endurance. The decision reflects a much more challenging strategic environment and environment we share with India."

The Australian High Commissioner said Australian PM, minister of foreign affairs and Australian minister of defence all spoke to their counterparts in India to inform them what the decision is. The fact is the decision has been arrived after deep consideration by his government by sober assessment of the capability required to meet a more challenging strategic environment.

The three ocean nation nuclear power submarines will provide Australia with capability it now believes it needs to deal with a more strategic environment."

Australia said joining AUKUS is its contribution to make Indo-Pacific more secure and is a strategic reassurance. The envoy to India said, "These partnerships with US and UK reinforce existing commitment to ASEAN centrality.

As you know Australia is striving to attain inclusive regional order where the rights of all states are respected whether they are big or small states. So we want to contribute strategic reassurance measures that ensures no one country believes they can advance their strategic ambitions to conflict and it's not about seeking to provoke a particular regime or power rather it is about ensuring whether we have capabilities that can contribute to peace and security in the Pacific today and in the future.

Australia said AUKUS will have no impact on Quad. The envoy said, "It doesn't change much for Quad partners including India except that Australia is improving its defence capability and its investments in nuclear power submarines."

"Quad as you know is a diplomatic forum. We all know that Malabar which is not part of Quad is an example. We often have joint military exercises together. Australia does it with United states, Australia does it with Japan bilaterally and we are seeking further to engage to further engage through the invitation to Raksha Mantri (Rajnath Singh) last week to further extend those. I don't think it has a direct impact on Quad. Quad partners will engage in bilateral, trilateral or quadrilateral exercises with Australia, he said.

Australian envoy also responded to French criticism. He said what is important here is that Australian government decision is based on its assessment of current strategic environment. It reviewed what was its existing programme with conventional submarines and its decided because of the issue it has raised strategic environment particularly in our region that we are moving to nuclear submarines. 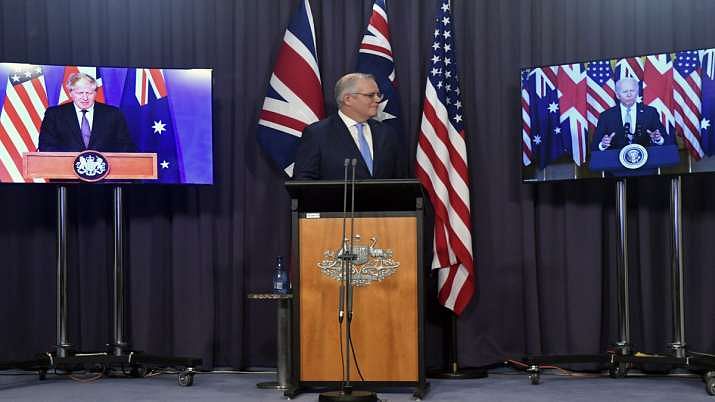