HomeIndiaAssam withdraws relaxation given to fully vaccinated; all travellers will again be screened on entry

Assam withdraws relaxation given to fully vaccinated; all travellers will again be screened on entry

The decision has been taken after it was found that 5 per cent of the new COVID-19 positive cases in the state in the last few days were among fully vaccinated people, an official said

Guwahati: The Assam government has withdrawn the relaxation given to the fully vaccinated people entering the state from mandatory COVID-19 test and issued a fresh order saying all travellers have to undergo health checkup on entry, an official said on Sunday.

The decision has been taken after it was found that 5 per cent of the new COVID-19 positive cases in the state in the last few days were among fully vaccinated people, an official said.

The state government on July 15 had announced that air and train passengers receiving both doses of COVID-19 vaccine will be exempted from the mandatory testing on arrival.

The latest notification, issued by the Health and Family Welfare department, has said that "COVID positivity is observed even in some of the person(s) who have received two doses of vaccination in a few instances," and hence, the earlier given exemption was withdrawn.

"Some people who have got both the doses of COVID-19 vaccine are getting infected. While the symptoms in them may not be severe, they run the risk of being carriers," Dr Lakshmanan S, director, National Health Mission (NHM), Assam, told PTI.

He informed that among the new COVID-19 cases detected in the last couple of months, approximately five per cent are people who were fully vaccinated.

A survey carried out by ICMR in Dibrugarh district in May and June had found 5.3 per cent of the sample size who tested positive for COVID-19 had received both doses of the vaccine.

Among those who had received the first dose only, the positivity rate was 12.4 per cent.

The persons who had received both doses and yet tested positive for the virus had displayed 'very mild symptoms and were in home isolation', the survey had found.

Dibrugarh district has reported second highest number of new cases and deaths in the second wave in the state so far.

Assam's decision to withdraw the exemption comes when in many other parts of the country, including Kerala and Mumbai, exemption for fully vaccinated domestic travellers from carrying an RT-PCR negative report for COVID-19 has been announced.

The Kerala government had on Saturday said negative RT-PCR test reports were no longer mandatory for inter-state travel and attending exams for persons who have received two doses of COVID vaccine.

A similar exemption from carrying the negative test reports was also given to people entering Mumbai from July 13.

The Assam government's decision to once again tighten the screening rules was also triggered due to apprehension of Delta plus variant entering and spreading in the state through people coming from outside, a Health department source said.

No Delta plus variant case has been so far detected in the state, the source added.

The Delta variant has been predominant in the state currently, with 77 per cent of random samples for April and May sent to the National Institute of Biomedical Genomics at Kalyani in West Bengal testing positive for this strain. The remaining were of Kappa strain. 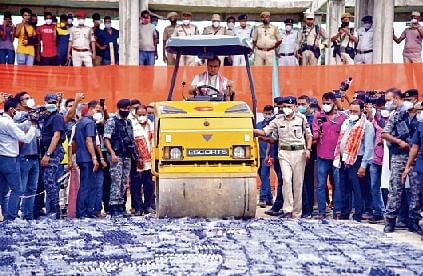