Amid talk of his quitting, Karnataka CM BS Yediyurappa may call Cabinet meeting on July 22

Bengaluru: A day after a flurry of activities in Delhi and Bengaluru, the BJP unit in Karnataka went into a silent mode Sunday regarding the future of Chief Minister BS Yediyurappa, leaving the field open to speculators.

However, the anti-CM group expressed confidence that Yediyurappa would tender his resignation after the meeting of party MLAs called on July 26, the day the CM completes two years in office. This is significant since he has been reluctant to call for such a meeting for several months amid discontent in the ranks over his perceived style of functioning and the alleged interference in administration by his family members.

Prior to that, the CM will chair a Cabinet meeting on July 22.

Sources in the rebel camp say that Yediyurappa may announce his resignation at the Cabinet meeting and then submit his resignation to the Governor. He will be asked to continue in office and the BJP meet of party MLAs would elect a new CM nominated by the highcommand .

The other option is that Yediyurappa would resign only on July 26 after completing two years in office. He will cite ill health as the reason. By then the party highcommand would have a successor in place.

“It’s just a matter of time…He (Yediyurappa) wanted the party leadership to choose a successor but it will be with his consent. The central leadership seems to have left it to the Chief Minister to decide the time of his exit,” said a senior party leader.

There were interesting insights into what transpired in Delhi when 78-year-old Yediyurappa met Prime Minister Narendra Modi and other senior leaders. Source said the PM gave the Karnataka CM a pep philosophical talk emphasising on the need to move forward in life and give the reins to the younger generation in the interest of the state. Party president JP Nadda gave the CM a political lesson and Home Minister Amit Shah had a stern one-line message: to execute the changeover without delay.

Interestingly, Yediyurappa did not get an appointment with Shah and was called back to meet the Home Minister after he had reached the airport to board his private flight to Bengaluru with his younger son B Y Vijayendra and his associates. Shah preferred to convey his tough message on the phone.

But Yediyurappa himself denied a leadership change saying he will complete his full term in office, leaving everyone puzzled.

“They have all asked me to strengthen the party. Even PM Modi said the same thing yesterday and Naddaji and Rajnath Singhji and today Amit Shahji said the same thing. I have said that I will not retreat and that I will work day and night to bring the party back to power. I told them that I would work to help the party win 25 seats again in the next LS polls,” Yediyurappa said.

Sources said Yediyurappa received signals that he should make way due to his advancing age, health concerns and the need for an image makeover.

But there is no talk of a possible successor as the party highcommand has left strict instructions for the party MLAs to keep quiet. 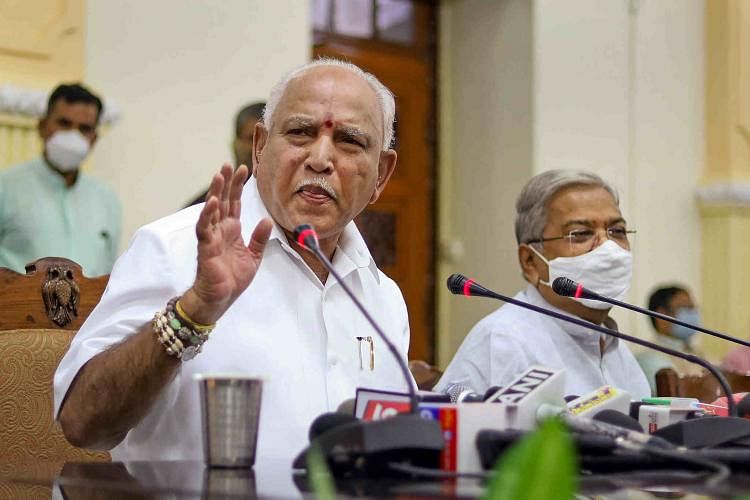