While 539 trains were affected, 529 trains were cancelled, including 181 mail/express trains and 348 passengers trains, the Railways said in a statement.

New Delhi: More than 500 trains were cancelled on Monday with operations again disrupted by protests against the Agnipath defence recruitment scheme.

While 539 trains were affected, 529 trains were cancelled, including 181 mail/express trains and 348 passengers trains, the Railways said in a statement.

Further, the route of another two trains originating from cities in Bihar and West Bengal has been curtailed on June 20.

"In the three days (from June 15 to June 17), around 620 people have been arrested and as many as 130 First Information Reports (FIRs) have been registered in Bihar," Sanjay Singh ADG, Law and Order, had said earlier on the protests against Agnipath recruitment scheme, adding that "140 people were arrested on Saturday".

As per the East Central Railway, over 60 trains were cancelled till Saturday and two were terminated due to the prevailing law and order problems and threat perception to the railway property and passengers in Bihar.

Have been waiting for 3-4 hours. When we checked train status last night,it didn't say cancellation, but on reaching here we found out about it, they say pic.twitter.com/bAL6DPkH0D

The Union Cabinet on June 14 approved a recruitment scheme for Indian youth to serve in the three services of the Armed Forces called Agnipath and the youth selected under this scheme will be known as Agniveers Notably, Agnipath is a pan India merit-based recruitment scheme for enrolling soldiers, airmen and sailors. The scheme provides an opportunity for the youth to serve in the regular cadre of the armed forces. All those recruited under the Agnipath Scheme will be called 'Agniveers'.

Agniveers will be enrolled for a service duration of 4 years including the training period. After four years, only 25 per cent of the Agniveers will be retained or re-enlisted in the regular cadre based on merit, willingness and medical fitness. 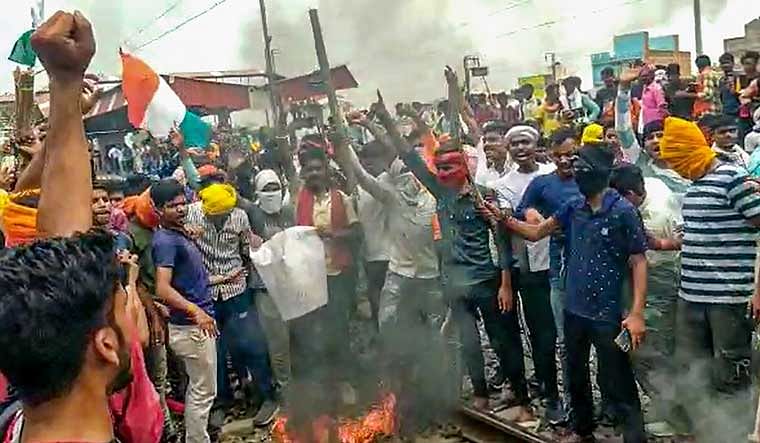