Children who participated in the protest also called for equal rights for women and held placards saying "education is our fundamental right".
ANI 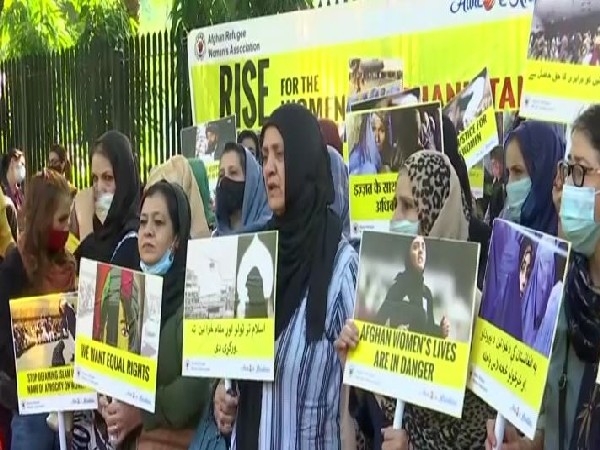 Afghan Refugees Women's Association on Saturday held a protest in Delhi to showcase their support to women in Afghanistan amid the Taliban's hostile takeover of the country.

The protesters carried placards that read "Stop defaming Islam in the name of atrocity on women". Females from different age groups including children and old aged women also participated in the protest. "We don't accept the Taliban government in Afghanistan," another placard said. Meanwhile, children who participated in the protest also called for equal rights for women and held placards saying "education is our fundamental right".

"We are here to speak on behalf of women living in Afghanistan," a women protestor said adding that the females in Afghanistan cannot speak to media now [after the Taliban takeover].

"We want to help these women, Taliban has snatched education right, freedom of women, women are feared of them [Taliban], Taliban just want us to produce babies," the protestor said while lambasting the Taliban takeover. "We want the world not to recognise Taliban and 'blacklist' the Taliban leaders," she said.

According to the international security director at the Asia-Pacific Foundation: "Women's lives [from 1996 to 2001] were very bleak and severely repressed by the Taliban. You're looking at an era where every aspect of a woman's life was controlled, contained, and confined." reported Four Nine.

The Taliban has proposed a ban on coeducation. Terrorist group's officials in Herat province had last week ordered that girls will no longer be allowed to sit in the same classes as boys in universities, Khaama Press reported Afghanistan crisis: US announces $144 million in humanitarian aid for people; to be given directly...