12 washed away as heavy rains trigger floods in Andhra Pradesh

Several areas of the temple town of Tirupati remained flooded on Friday. Heavy rains since Thursday wreaked havoc in the town.
IANS 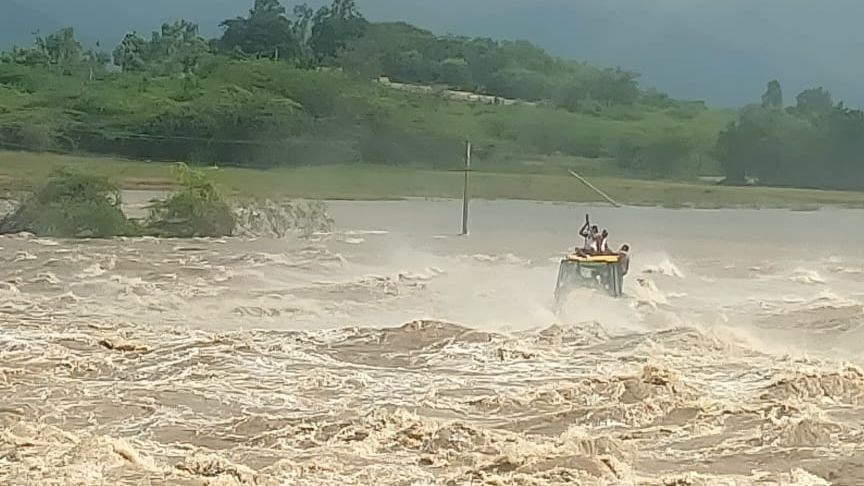 At least 12 people were killed and 18 others went missing after three buses of Andhra Pradesh Road Transport Corporation (APSRTC) were stuck in floods triggered by heavy rains in Kadapa district on Friday.

Rescue workers pulled out 12 bodies and were searching for the missing people in Rajampet area.

The buses were stuck in floodwaters in Mandpalle, Akepadu and Nandaluru villages. The passengers along with drivers and conductors had climbed on the top of the buses. While some were rescued by the local residents, 30 people were feared washed away.

Annamayya reservoir in the district breached, leading to floods in surrounding villages of Gundluru, Seshamambapuram and Mandpalle. An overflowing stream also inundated Nandulur, Rajampeta and other areas.

Meanwhile, 10 people stranded in Chitravathi river in Anantapur district were airlifted by a chopper of the Indian Air Force (IAF). The helicopter was pressed into operation after local authorities failed to rescue the people stuck in flood water.

Heavy rains lashed Nellore, Chittoor, Kadapa and Anantapur districts on Friday under the influence of depression which crossed north Tamil Nadu and adjoining south Andhra Pradesh coasts between Puducherry and Chennai in the early hours of Friday.

Low-lying areas in the three districts were inundated while rivulets, streams, tanks and reservoirs were overflowing.

The massive downpour has paralysed normal life. Authorities have declared a holiday for all educational institutions in the affected districts.

The state government has appointed three special officers to monitor rescue and relief operations in Nellore, Chittoor and Kadapa district.

Several areas of the temple town of Tirupati remained flooded on Friday. Heavy rains since Thursday wreaked havoc in the town.

The Chief Minister will cover areas affected by heavy rains including Kadapa, Chittoor and Nellore, after reviewing the rain situation with the respective district collectors.

He will leave for Kadapa directly from Gannavaram Airport at Vijayawada for surveying the flood affected areas by helicopter and return from Renigunta Airport at Tirupati.