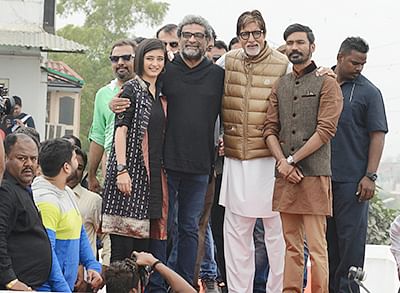 Calling Dhanush one of the most “intelligent actors” of the country, filmmaker R. Balakrishnan aka Balki, who has directed the actor in “Shamitabh”, wishes he had met him earlier in his life.

“Dhanush is one of the most intelligent actors I’ve come across in Indian cinema. There’s so much a filmmaker could achieve with him. I wish I had met him earlier in my life. I’d have made more films with him,” Balki told IANS.

“Shamitabh”, which also features megastar Amitabh Bachchan and debutant Akshara Haasan, is Dhanush’s second film in the language after “Raanjhanaa”. Dhanush plays a mute character, voiced by Big B.

Commenting on the film, Dhanush had said that he’s “experimenting” in Bollywood as he’s got “nothing to lose”. The film marks Balki’s third collaboration with Big B and maestro Illayaraja, whom he describes as the “definition of music”.