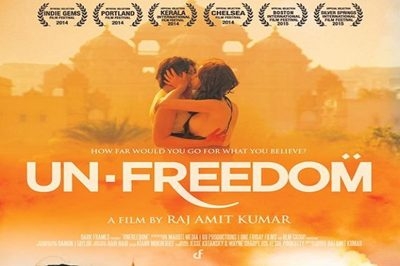 New Delhi: Resul Pookutty has scored two nominations at the Motion Picture Sound Editors’ 63rd annual Golden Reel Awards this year for “Unfreedom” and “India’s Daughter” – films which have been banned in India. The Oscar-winning sound designer says the recognition outside India tells that “we have to keep our mind open as artists”.

“Unfreedom”, a film on homosexuality, was nominated in Feature Film – Foreign Film (Sound Effects, Foley, Dialogue and ADR) category. Directed by Raj Amit Kumar, the film was banned in India due to its bold scenes.

Leslee Udwin’s controversial BBC documentary “India’s Daughter” received the nomination in the Television – Short Form, Documentary category. The documentary was about the gang-rape of 23-year-old trainee physiotherapist Jyoti, who was brutally assaulted on December 16, 2012 in a moving bus in Delhi.

Having won an Oscar for “Slumdog Millionaire” in 2009, Pookutty feels that “Work that spoke through the heart, is being recognised by the people.”

“The recognition outside India simply tells us that we have to keep our mind open as artists. I am getting messages from all over the world that we have not seen this work in India but its being recognised outside. That is something that our policy makers need to think about,” Pookutty told IANS over the phone from Mumbai.

Dedicating his nomination to Jyoti, Pookutty said that her parents have behaved more wisely than the most educated people in the country.

“For me, to be able to work in a film that depicts her (Jyoti) story was a responsibility. Today that work has been recognised at the world’s highest platform. I definitely want to dedicate it to her (Jyoti) and her parents. I think they have behaved far more wisely than the most educated in this country,” said the 44-year-old.

Sharing his sentiments over the nominations, Pookutty, who has also worked on films like “Black” and “Everybody Says I’m Fine!”, said that he hopes to win at least one award and that will give a huge boost to Indian sound professionals.

“I am surely hoping to win at least one. It will be a huge boost for Indian sound professionals because this is not a small nomination… It is judged by some of the top professionals in the world after all. The nomination itself is very huge that we be nominated to this level, itself is a huge recognition. So winning will be a bonus,” he concluded. Winners of Motion Picture Sound Editors’ 63rd annual Golden Reel Awards will be announced on February 27.