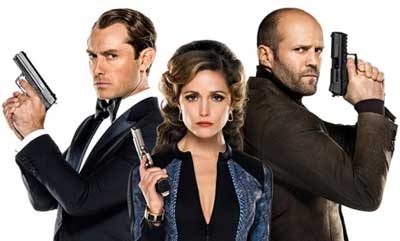 And I don’t know about Mossad or the KGB, but the CIA and M15 have been headed by women.That signal occurrence is of recent vintage though women have worked as spies throughout history. One of the most important women spies during WW2 was a part American, part Indian called Noor Inayat Khan whose life has been immortalised in a book (Shrabani Basu) and a TV docu-drama (Robert H. Gardner) but that was it. There have been movies like Salt and Mr & Mrs Smith starring Angelina Jolie but isn’t it time a full length bio pic was made about a woman spy instead of action comedies about fictional characters like the film under review?

Your reviewer is delighted to note though that Spy, written and directed by wannabe stuntman Paul Feig, is full of strong,very strong women. Working with actress Melissa McCarthy for the third time, after The Heat and Bridesmaids he gives the very pretty, roly-poly McCarthy,a nifty turn as a female comic version of Bond,James Bond.But then, Susan Cooper wasn’t always like that.Quick on the draw and the heave-ho, that is.

Feig’s film pays homage to and merrily spoofs Bond and assorted spymasters, by showing Susan shifting multiple and most embarassing identities (including that of a cat lady) and saving The Enemy, ruthless Bulgarian arms dealer Rayna Boyanov (Rose Byrne), more than once. It doesn’t help that Susan has to deal with an oversexed Italian colleague and with Rick Ford (Jason Statham,hilarious with heavily embroidered accounts of how he survived previous assignments) Ford considers himself a pro and follows newbie Susan to Paris and Rome.

Interestingly,Statham’s Ford character and that of Susan’s best friend Nancy (Miranda Hart) were especially written for the actors to play.

The beautiful Nargis Fakhri has been given top billing in the Indian ad campaign although she has only one scene. But she makes her presence felt.And how! (Law’s character also disappears after a sequence or three post the Bond-style opening, replete with a Bondish song.) Actually, Spy has a large ensemble cast of characters who,thanks to a smart script, are integral to the plot and come and go after shining in their place in the sun.

Which includes using cuss words and inflicting violence. The action scenes, it may be duly noted, are intense and the only thing that Spy does not spoof. In fact, Spy goes over the top with graphic footage in which you flinch. at least, I did. The rest of the time I laughed my head off. Or squirmed at the vulgarity.That apart, Spy is a blast of a film.