Uri: The Surgical Strike starring Vicky Kaushal and Yami Gautam is the first hit of the 2019. The film has not only won accolades from critics and audience but the film fraternity and politicians have also given it a positive nod. PM Narendra Modi addressed an inauguration event this past weekend with “How’s the Josh?” line which is a dialogue in the film. As the film is witnessing an extraordinary run at the box office, Rishi Kapoor too has called it a terrific warfare film.

Rishi Kapoor, who has been doing his treatment in New York, got an opportunity to watch the Vicky Kaushal starrer. After watching the film, he took to Twitter to share a poster of the film and wrote, “Saw URI. Terrific war fare film. Perhaps the best ever made in India. It bought the home the point India has nothing against the citizens of Pakistan but those terrorists being trained in camps against us. Bravo. Let this be an eye opener.” 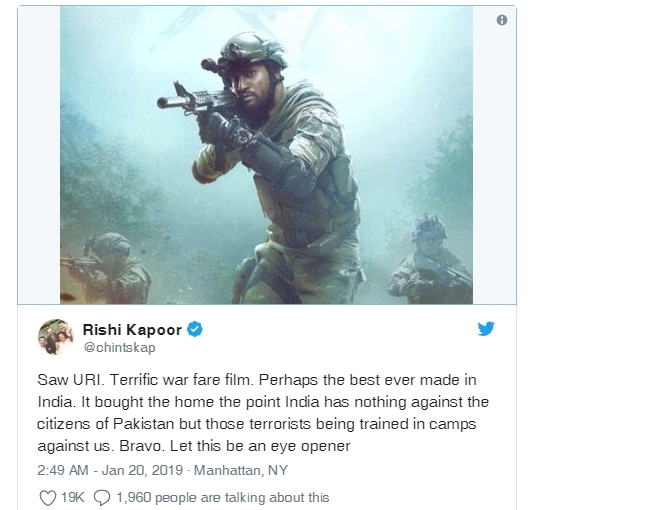 Uri: The Surgical Strike is based on the surgical strikes which were carried out by the Indian army in 2016. Besides Vicky Kaushal, the film also features Yami Gautam, Paresh Rawal, Kirti Kulhari and debutante Mohit Raina. The film has been directed by Aditya Dhar and it has been produced by Ronnie Screwvala.