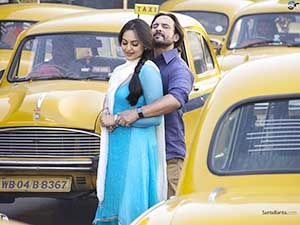 This film by Tigmanshu Dhulia coming close on the heels of his much superior works that include ‘Paan Singh Tomar’ and the ‘Saheb Biwi aur Gangster’ series, is quite a disappointment. It is artless, caricaturish, patchy and jumping all over the place. The dialogues, masala ingredients and performances are pretty much on the up though.
For starters, this is Tigmanshu Dhulia’s most commercial and decadent work. There’s not much imagination or thought-process at work here other than blatant commercial considerations. Lending the Nawab, Saif Ali Khan, a continuum from his Agent Vinod and Langda ‘Omkara’ Tyagi assay, Dhulia mixes rusticity with savvy brutishness to create a comic-book hero moniker Bullet Raja a.k.a Raja Mishra (Saif), an everyday man who together with his friend Rudra (Jimmy Sher Gill) gets unwittingly entangled with wily criminal minded unsavoury forces and therefore are forced to take up the gun in an attempt to restore parity between the forces of good and evil…not much different from countless other mainstream Bollywood ventures.
The film opens with a raunchy item number featuring Mahie Gill and then moves swiftly into auto-run to establish the bonhomie between Raja and Rudra. The establishment of the friendship between the two brings in the film’s most enjoyable moments with some silly inventive phrases thrown in to spring a few laughs. Once the narrative starts spewing bullets and manufactured aggro , the going gets a little too jumpy.
The action is a little too haphazard and way too wayward. The editor tries hard to cover–up the short-takes but the stretching is a little too unbelievable for a suitable fit. The shot-taking gets shorter and shorter till it comes to a point where you wonder whether the next shot is actually part of the same sequence. There’s no attempt made to keep the background or the foreground consistent.
To add to the murkiness, a fast-track romance ensues between Raja and a Bengali girl (Sonakshi) who at first glance appears to be willing to go the casting couch way for a debut in Bollywood. Sonakshi more or less reprises her ‘Once Upon A Time In Mumbai Dobaara’ role – here she is playing a wannabe starlet, who on the verge of stepping-off of the virtuous bandwagon (with money bags producer played by Gulshan Grover), accidentally bumps into Raja and finds herself a savoir.
Once Sonakshi enters the frame, Jimmy Shergill takes a back-seat and conveniently gets off mid-way through the film. Thereafter it’s all about revenge and how Bullet Raja engineers a lacklustre extension of life – for the sequel so-to-speak, by hood-winking the murderous politicians (Sharat Saxena and Raj Babbar) baying for his blood.
The action assigned to Saif and Jimmy is badly orchestrated while the ones where Vidyut Jamwal features, looks solid and believable. The music is a mixed bag with its raunchy set-pieces and half-way melodies. The screenplay by Tigmanshu Dhulia and Amaresh Misra is a little too sketchy and the characterisations also suffer the same malady. The brotherhood bit is of the ‘Sholay’ kind and they make no bones about that but it doesn’t get further than two men on a bike goofing around. The battle that ensures towards the latter half is much more concerned with rampant blood-letting and lacks concerted motivation.
Jimmy Shergill is the standout actor here because he fits in so beautifully that the others are made to look like mere props. Saif is a little too suave to blend into a rustic milieu but he is immensely charming and manages to look the part even if it’s not comprehensively convincing- and this despite his heavily botox face. He has got some sterling lines and he delivers them with great panache no doubt. Chunkey Pandey does a slimy cameo quite befittingly too. The rest are all numbers added, much like the music to make the entreaty look populated.