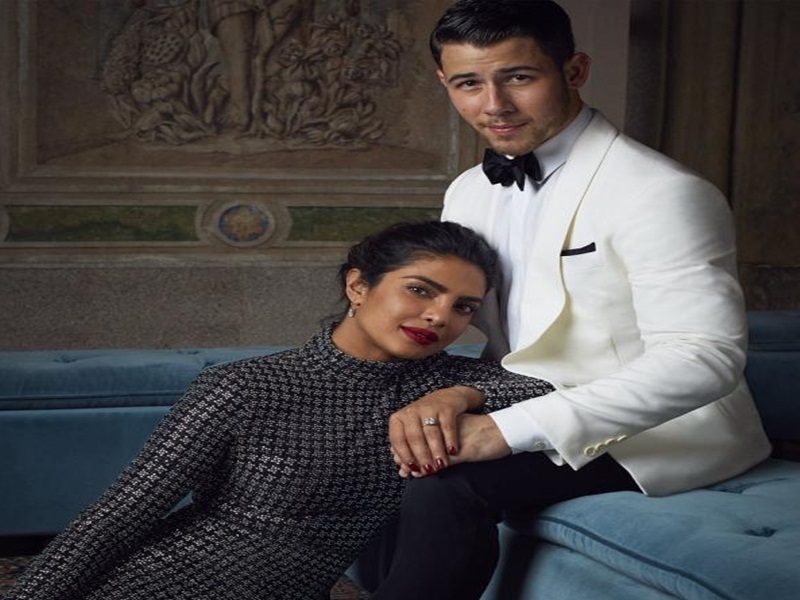 Lovebirds and recently engaged, Priyanka Chopra and Nick Jonas, were spotted with their close friends enjoying a quiet date night in LA, specifically at Malibu’s Nobu restaurant. Priyanka looked gorgeous in a fuchsia plunging neckline blouse which she paired with matching wide-legged pants. Pairing the dazzling outfit with pink strappy heels, a Gucci bag, a gold necklace, and red lips, Priyanka’s hair was casually styled in an updo.

PeeCee was also spotted that the $200,000 Tiffany & Co. engagement ring on her finger. On the other hand, Nick kept it casual cool in an oversized denim jacket which had a patchwork in it and he paired it with a white tee, camel chinos and black canvas shoes, reported Pinkvilla.

Meanwhile, Priyanka also revealed in an interview that she was busy with her wedding planning. A traditional Roka ceremony took place on August 18, 2018, a month after Priyanka’s birthday. It was during her 36th birthday celebrations that the Jealous singer proposed to his ladylove in London.

Nick Jonas also appeared on Jimmy Fallon’s The Tonight Show on September 7 where he finally told the story of how they met. When Jimmy congratulated Nick on his engagement, Nick revealed how they got connected over texts way before MET Gala 2017 appearance as friends. “We met through a friend, so we got connected first over text and we started talking for a while and it was about six months before we met up in person. And then we attended the MET Gala a few years ago together. Had a great time but it was just as friends.

“And our lives were kind of taking us to different places. And the thing was funny as people would ask us, in interview settings and in private, ‘Are you guys seeing each other?’” he said. “And the answer was no. People thought we were being coy, and so did we, until we cut to, now we’re engaged, so the story sort of wrote itself,” he said. “We met up again, I think 5 months ago now and it was kind of immediate and we sort of jumped right in and we’re very happy,” he added.