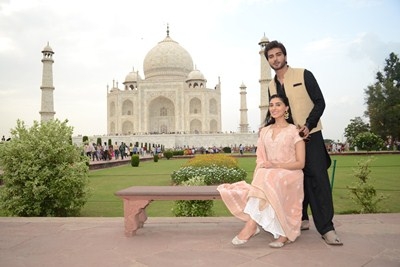 Pernia Qureshi who is currently on tour for the promotions of her upcoming film JAANISAAR, surprised her co-star Imran Abbas with an impromptu trip to Agra. The cast and crew of the movie are visiting several cities including Lucknow, Chandigarh and Delhi, and decided to take a detour to visit the Taj Mahal.

Pakistani heart-throb Imran Abbas always wanted to visit the iconic monument but didn’t have the opportunity before. A source revealed, “Since Imran has been a student of architecture, Pernia thought visiting Taj Mahal would be the best surprise for him. Imran was very happy with Pernia’s sweet gesture and thanked Pernia for the same.”

Imran had no idea of Pernia’s plan. The actress was secretive and only informed him of a trip to Agra, but instead took him to see the Taj Mahal.

Set 20 years after the first war of Indian independence in 1857, JAANISAAR essays the love story of a revolutionary courtesan of Avadh, and a prince brought up in England. Jaanisaar is directed by Muzaffar Ali of cult classic UMRAOJAAN fame and produced by Meera Ali. You can catch this period drama starring the gorgeous Pernia Qureshi and Pakistani heartthrob Imran Abbas Naqvi in theatres on August 7.