Omung and Richa hold “Sarbjit” very close to their heart 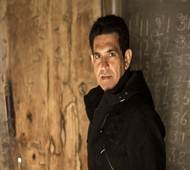 The digital world was recently bombarded with a series of powerful posters of Omung Kumar’s upcoming biopic SARBJIT. While the industry, audience and media are showering the makers of the movie with positive feedbacks, the man behind the stunning posters is no one other than the sailor of the ship- Omung Kumar.The national award winning director and a renowned art designer, has done the creative designing of the newly launchedposters of the film as well.

The director who is known for his minute detailing and flawless profiling made point to give close attention to the posters. A source close to the director claims that as the director of the movie Omung has an eye of what exactly he wants to deliver to his audience. During the shoots also, the talented director used to keep close watch on the visualization of each scene, he is used to be very particular about the colours, fabric of clothes, background and such minute details. Even in all the posters if one notices there are gobs of detailing done which results in a very rich look. All the four posters which are out have uniqueness in itself which makes them distinct.Talking further about it, Omungsays, “I am getting overwhelming response from everyone on all the four posters and trailer which we recently released.

It is a good feeling when your work gets noticed and appreciated too. SARBJIT is a special film for me, it’s a story of a man who was abandoned by his people, forgotten by his country and portrays unbreakable struggle of his sister Dalbir Kaur”. Speaking of other actors in the film, Richa Chadha will soon be seen essaying the role of Sukhpreet in film. The actress plays the role of Sarabjit’s wife in a movie that will show the real struggle of a man who was falsely convicted in a terrorism case and was released from the jail after 17 years of fight.

The film’s crucial element is Sarabjit’s sister who along with Sarabjit’s wife fought a case for 17 years to get justice. Richa herself has two brothers in real life and for her the bond in the movie is so powerful between the siblings that Richa feels extremely close to the movie. “My brothers mean a lot to me and to see a film which speaks about a sister’s struggle to get justice for her brother gives me chills. It is such an amazing human story of survival and I have to brother who have been my support system.

To be a part of a movie of this nature sure makes it very special for me,” said Richa. Not just this, Chadda has been making rounds in the news lately for her intense and pivotal character in the film as well. She is recognized for her crisp acting talent and is known to be completely a director’s actor. But the vivacious actress does have some fun on set too.Apparently Richa being a Punjabi helped shooting the fun song, ‘Tung Luk Tung luk’.

The choreography of the song involves a lot of folk Punjabi steps and Richa being a Punjabi, enjoyed dancing to the track and also pitched in some more moves! She enjoyed the steps and also helped Randeep Hooda to pick up the steps as he is not a great dancer and is dancing in a song for the first time. “She picked up all the steps pretty soon and enjoyed doing them.

Between cuts she also used to suggest some innovative steps and also made the director and crew to dance on the song! She has always lit up everyone’s mood whenever she comes on set and we all enjoy shooting with her” says a source from the set. Talking about it, the lovely Richa added” I have always loved dancing be it any form of it, but being a Punjabi bhangra & Gida tends to be my favourite.

When I heard the song for the first time I was quite excited as I found it to be very peppy and fun, therefore was looking forward for it’s shoot. At the time of shooting the song, the set up, the atmosphere was so lively that I got into the feel and tried my own steps in between. The choreographer really liked it and included it in the dance. The song is so catchy that in no time the entire set became like a dance floor for everyone.”