Neetu Kapoor will soon make her debut as a judge in the show Dance Deewane Juniors. It will premiere on Colors TV on April 23. The Free Press Journal caught up with the actress at its launch event for an exclusive chat. Excerpts:

Do you not regret discontinuing your successful career after marriage?

I had worked so much and had seen so much fame after Do Kaliyan. My life had turned robotic. The money was handled by my mother. There was nothing much left for me. I was very happy leaving it. I could have worked if I wanted to. Life just went by.

How do you get out of sad situations? Also, could you talk about your debut as a judge in the show?

Be content with whatever you have in life. I don’t crave for more. Whatever the situation, I always remain happy and like to get out of any sad situation that I may be facing at that point in time. And find ways to do it. That’s the reason I started working. I decided to do a movie (Jug Jugg Jeeyo) to come out of that sad phase. I was very nervous, and my confidence level was zero phir bhi chali gayi like a braveheart. Before that shot in Chandigarh, I was dying of nervousness. But I continued doing it, and slowly I felt my heart heal. I started doing this show because I wanted to get out of that entire sadness, whatever I went through those two or three years. Your busy working schedule takes your mind off a certain situation. As soon as my mind changed, I started feeling good. Thereafter I did two shows, Indian Idol and India’s Got Talent. Here I met so many people hence I not only felt good but gained loads of confidence.

Judging kids, what exactly will you do?

My role of judging kids makes us very warm. Whatever I comment is very heartfelt. Marzi (Pestonji) and Nora (Fatehi) will handle the technical aspects. I am there as a judge just to spread love and warmth to the children so that they gain confidence and perform better every time they come on the stage.

What do your children have to say about your TV debut judging this show?

They are very excited about me judging Dance Deewane Juniors. When Ranbir sees my Instagram pics, he says, “Mom, you are killing it!”. In response, I say, “Ranbir, I hope I kill it in the show also.”

As an artist now, what are you exploring?

In Jug Jugg Jeeyo, I’m performing a role that I had never explored before. It’s a very serious role. Earlier, my roles were all chulbuli and fun-filled. I either played a pickpocket or tried to harm people with knives to get my ulterior motive fulfilled in films. In this movie I play a very thehri hui aurat (an understanding, serious yet very balanced woman). My character is like every woman is going to enjoy her. That is one of the reasons I’m doing it. It's a very relatable character. What kind of step she takes and what kind of life she has will be seen through my character. Let’s see what life has to offer me in future.

You and Ranbir have done an ad together. What was the experience of working with him like?

He keeps advising me while performing together and says, "Mom aise paun rakho!" So I’m like, "Tu merko batayega? Main teri maa hoon!"

Ranbir is an obedient child, do you agree?

Ranbir is a very obedient child. When we did Besharam, he always looked down and talked with his father. He never looked into his eyes in real life too. But in one scene, when he had to look into his eyes and do the shot, after finishing the shot, he came to me and said, "Mom, I have seen the colour of dad's eyes for the first time. Kapoor khandaan ‘s eyes are superb!"

Are you a strict mother? What about the late Rishi Kapoor?

I am not a strict mom. He never ever shouted at our children. They were scared of him, and I would scold them. He would get angry at me. He would say, “Tell your children. If you get such marks, next year your father is going to sign. They would get nervous and plead with me not to tell him, and they would fare better in their next exams. That is the way we handled our children as parents. 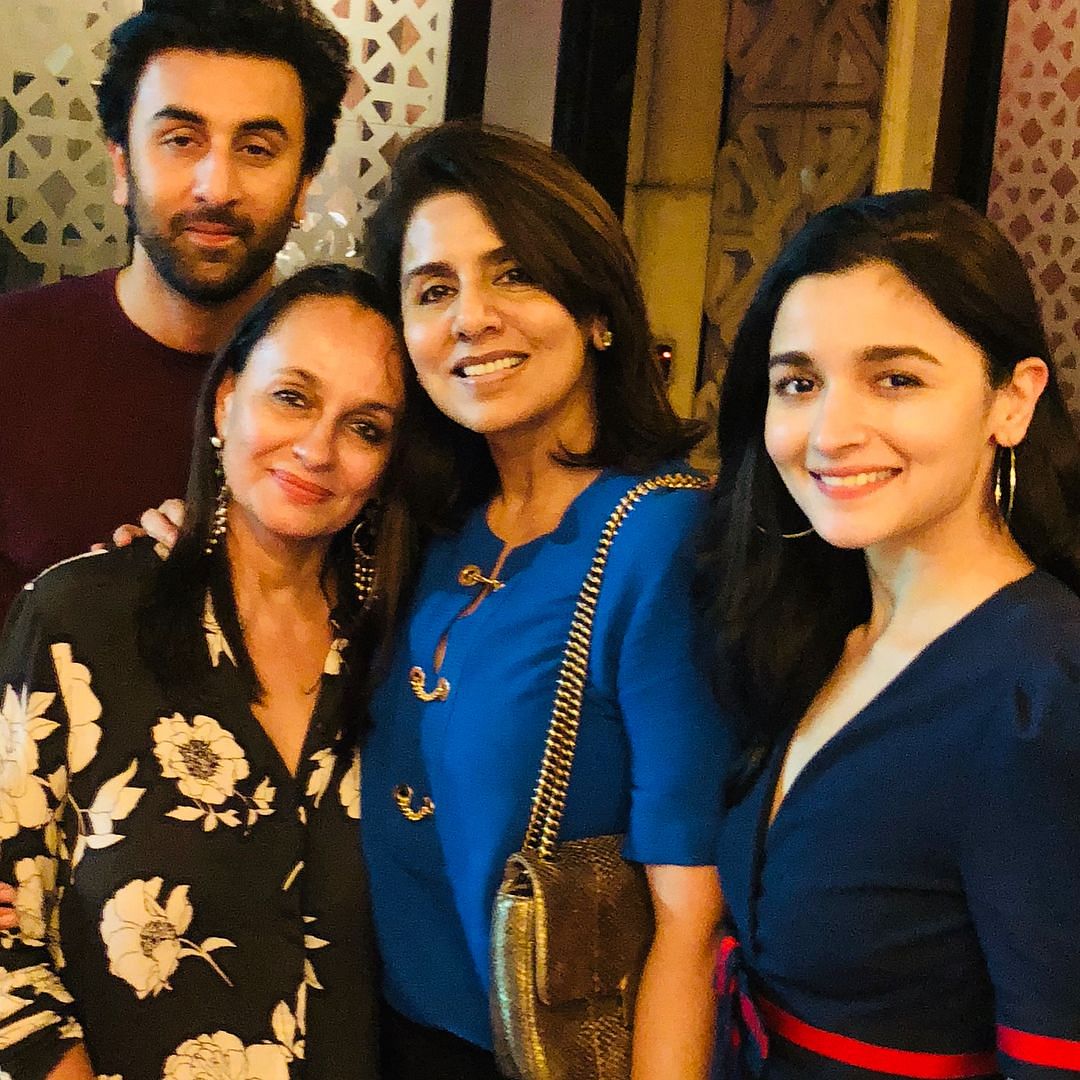 What is your take on the speculations surrounding Ranbir and Alia’s (Bhatt) wedding?

I love Alia. I think she is the most outstanding human being. She’s lovely and pure. They both make a great pair. But kab hogi? Do saal se ho rahi hai that’s what I’m hearing. I only know different dates of Ranbir’s marriage to Alia are in media circulation. The location is RK Studios, and last year it was in Ranthambore. My marriage was in a grand style, but such marriages are not possible in today’s times.

Speculations of the most sizzling and happening jodi of B-town have come to an end. A source spills the beans that the dates are indeed April 13, 14 and 15. The guest list is going to be huge... from well known singers, music directors, actors, producers to personalities from the corporate world as well. Press meets that were to be held on April 14 especially stand cancelled due to the marriage celebrations. “The press meet of a well-known channel, which was to be held on April 14 for a kids based reality show, stands cancelled owing to the wedding ceremony of Kapoor khandaan’s most eligible bachelor Ranbir,” the source reveals.