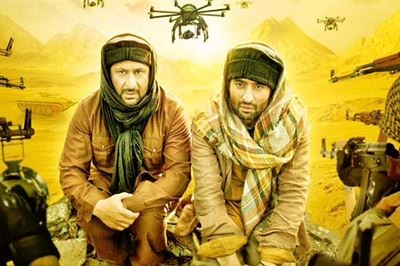 This one’s nothing to laugh about. In fact the trailers were terribly misleading. The handful of scenes that happen to bring a smile to your faces are all in the trailer. So why go to the cinemas you may well ask? The smartest thing associated with this movie are it’s promotions. The trailers whetted your appetite and the item numbers with scantily clad firang women were an added lure at least for some.

It’s a mad world out there.- The ‘Dumb and Dumber’ kind – coming from the horses’ mouth no less. Kedar (Jacky) and Shammi (Arshad Warsi) are two misfits who have a millionaire benefactor (Daleep Thahil), Kedar’s father no less, allowing them free rein to do damn all as they please. They go off into sea, ostensibly to celebrate a wedding party, and end up ship-wrecked and washed ashore on Karachi beach where a bomb blast happens. The two are in hospital and wake up to find they are in Karachi. The terrorists and the Pakistani super sleuths are now looking for them.  Needless to say the two save the day and win accolades from their countrymen for acts of bravery which they obviously did not commit to.

The film has a very cheap look to it. The production values are suspect. The tacky opening credits itself give you the feeling that there’s very little of affect to follow. The script lacks basic sense. Even if the characters are supposed to be dumb misfits, there has to be some logic in setting them up on a path to redemption. That’s not to be found here. the dialogues sound disconnected. The set-ups are all lacking in finesse. Jacky Bhagnani has improved considerably as an actor. He does well to stick with the Gujrati bumpkin affectation throughout. Arshad Warsi is his usual proficient self. Together they just don’t generate the laughs required to get you entertained. Play safe on this one!