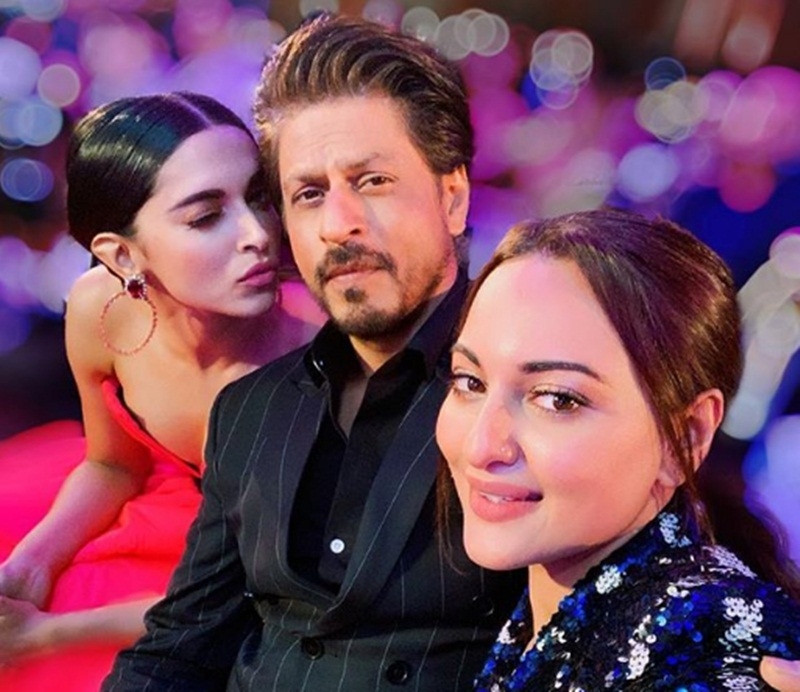 Filmfare Glamour and Style Awards happened yesterday, and it was attended by Bollywood biggies like Janhvi Kapoor, Sonam Kapoor, Vicky Kaushal, Shahid Kapoor and many more. However one click from the event is going viral on social media. Actress Sonakshi Sinha was seen posing with Shah Rukh Khan and Deepika Padukone . Sonakshi also made sure that she post the picture online, and captioned it “Money Shot.”

During the event, both Sonakshi and Deepika looked glamorous. While the Dabangg star wore blue and white sequin pantsuit, DeePee was seen donning a stunning peach coloured strapless gown. SRK, on the other hand, looked his dapper self in an all-black outfit.

Check out the photo below.

Thanks for my #RiskTaker of the year award last night @filmfare #glamourandstyleawards ! Takin a risk right here in this sequenced number styled by @mohitrai (tap for deets), hair @themadhurinakhale, makeup @ritesh.30 ❤️ photos by @trishasarang

On the work front Sonakshi has three films in her plate for this year. Her upcoming film ‘Kalank’ is multi starrer which includes actors like Varun Dhawan, Alia Bhat, Madhuri Dixit and Sanjay Dutt. Apart from this, she will also be starring in Jagan Shakti’s Mission Mangal which also features Akshay Kumar, Taapsee Pannu and Vidya Balan in the lead roles.