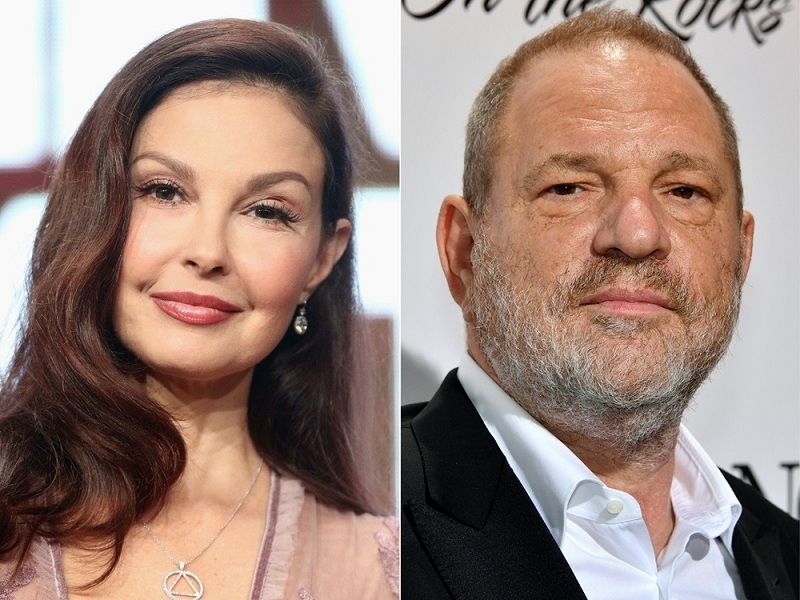 (COMBO) This combination of file pictures created on July 18, 2018 shows US actress Ashley Judd (L) speaking onstage during the EPIX portion of the 2017 Summer Television Critics Association Press Tour at The Beverly Hilton Hotel in Beverly Hills, California on July 24, 2017, and US film producer Harvey Weinstein attending the De Grisogono Party on the sidelines of the 70th Cannes Film Festival in Antibes, France, on May 23, 2017. - A Los Angeles court on January 9, 2019 dismissed actress Ashley Judd's sexual harassment lawsuit against disgraced Hollywood producer Harvey Weinstein -- but said she can move forward with allegations he defamed her and damaged her career. (Photos by Frederick M. Brown and Yann COATSALIOU / various sources / AFP) |

Los Angeles: A federal judge in California has dismissed Ashley Judd’s sexual harassment lawsuit against tainted Hollywood producer Harvey Weinstein on technical grounds as the suit did not fall within the ambit of the statute she sued under. According to The Daily Beast, judge Philip Gutierrez has, however, let the actor’s claims of defamation, economic interference and violation of the state’s unfair competition law stand against Weinstein.

The 49-year-old actor was one of the first actors to go on record to accuse the media mogul of sexual abuse in the explosive October 5, 2017 New York Times article. Judd filed a lawsuit against Weinstein for trying to sabotage her career. In the suit, she alleged that the producer dissuaded director Peter Jackson and Fran Walsh from working with her in the “Lord of the Rings” trilogy as she had rebuffed his sexual advances.

She claimed that Weinstein “torpedoed Ms Judd’s incredible professional opportunity” to work with Jackson by telling him she was a “nightmare” to work with and should be avoided “at all costs”. “The pathetic reality, however, was that Weinstein was retaliating against Ms. Judd for rejecting his sexual demands approximately one year earlier, when he cornered her in a hotel room under the guise of discussing business,” wrote Judd’s attorney Theodore Boutrous Jr.

“A self-described ‘benevolent dictator’ who has bragged that ‘I can be scary,’ Weinstein used his power in the entertainment industry to damage Ms Judd’s reputation and limit her ability to find work,” the complaint further read. Gutierrez initially dismissed the sexual harassment claim in September because he was sceptical that the statue under which Judd filed the suit could be applied to her case or any other involving a “potential employer and a prospective employee”.

The judge permitted the actor to take another go at making an argument for the claim but determined Wednesday that she had not met the bar under the California law or a recently enacted amendment to the statute. In his ruling, Gutierrez made it clear that the court is not ruling on the facts of the case, whether Judd was “sexually harassed in the colloquial sense of the term”, but if the “plaintiff allegedly suffered falls within the scope of the California statute that she has sued under”. The decision in the civil suit comes as Weinstein is preparing for a criminal trial in New York on multiple counts of sex abuse that is expected to go to court later this year.