HomeEntertainmentHow I met my husband: 'I hated him,' says Tannaz Irani and reveals what made her fall for her husband Bakhtiyaar Irani

How I met my husband: 'I hated him,' says Tannaz Irani and reveals what made her fall for her husband Bakhtiyaar Irani

She avers, “Bakhtiyaar and I are a perfect match for each other. We bring balance to our marriage.”

It is often said, love knows no boundaries, age, religion, race or caste. And this certainly is true in the case of television's most-loved couple, Tannaz Irani and Bakhtiyaar Irani. Tannaz debunks the popular notion that a marriage in which the wife is older than her husband — in this case, seven years — fizzles out. She avers, “Bakhtiyaar and I are a perfect match for each other. We bring balance to our marriage.” The couple has been married for 13 years now and has two children — Zeus and Zara; Tannaz also has a daughter from her first marriage, Zianne, and the three kids are quite close to each other. Here, the actress gives a glimpse into courtship days and marital life. Excerpts:

Where did you first meet Bakhtiyaar?

I met him on a reality singing show, Fame Gurukul.

Was it love at first sight?

It was not love at first sight; I hated him at first sight! I found him very muhfat (outspoken), mean and in my face. I thought this man is a sharpshooter and I need to stay away from him.

We were pitted against each other as singers. Since I was a better singer than him, Bakhtiyaar was asked by the producer of the show to play a prank on me. He belittled me and I burst into tears. Then once he soaked his handkerchief with fake blood and began coughing exaggeratedly. I ignored him and he finally admitted it was a prank. But by that time, meri satak gayi thi (I had lost it).

He called me when I reached home, but I did not accept the call. The next day, he wrote a note saying, “I respect you a lot and I am sorry for the prank”.

How did your relationship begin?

I was out for drinks and actor Amit Sareen and Bakhtiyaar were there too. During that time, we started chatting. After a while, he confessed his feelings. “I like you and I want to be with you,” he said, and I nodded in agreement because I wanted to extricate myself from a sticky situation. When he came to drop me home, he said, “I want you to be the mother of my children,” and I was like this is going too fast. But, eventually, I did marry him!

Where do you go for a first date?

We went to a nightclub.

Did you go Dutch?

Bakhtiyaar paid for everything. He still does. I didn't marry him for money. I always wanted to marry a Parsi boy from my profession. We are a good fit.

He did. He is the one who proposed marriage too.

Tell us about the proposal.

We were partying with the entire group of Fame Gurukul. He offered me a slice of cake. When I had a bite, I was like, “Oh my God, this cake has hard eggshells.” But to my surprise, an engagement ring was embedded in the cake.

Who apologises first after a fight?

Initially, he did; now I do. A relationship means more to me than my ego. We are not ‘the’ problem; the problem is independent of both of us. When Bakhtiyaar and I fight, my children tell me, “Your face is tattooed on this back, where will he go?”

He is. But it doesn’t stem from his insecurity; he loves me a lot.

Was there any opposition from your families over your decision to marry?

Yes, there was. I'm seven years older than him. So, his family was reluctant. He was not a very famous person nor was he making a lot of money. Hence, my family was not too keen either. Therefore, we started living together in a small house.

Read Also
How I Met My Husband: 'The Kapil Sharma Show' actor Sugandha Mishra gives a peek into her love story... 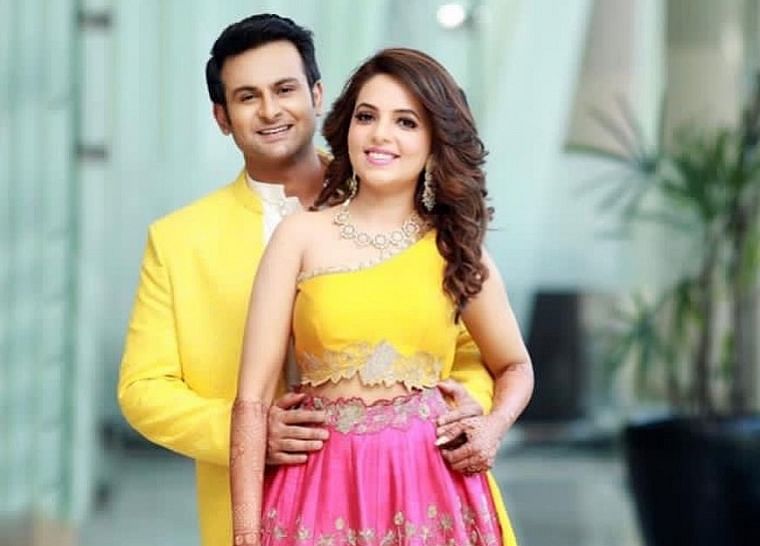 Shraddha Kapoor shares insight into Thumkeshwari hook step: 'Had wondered whether audiences will...

Randeep Hooda: 'There has to be balance between glamour and actual meat in the story'