CUPID Ranveer Singh made Sara Ali Khan meet Kartik Aaryan and we have the MOMENT CAPTURED for you! (Watch video) 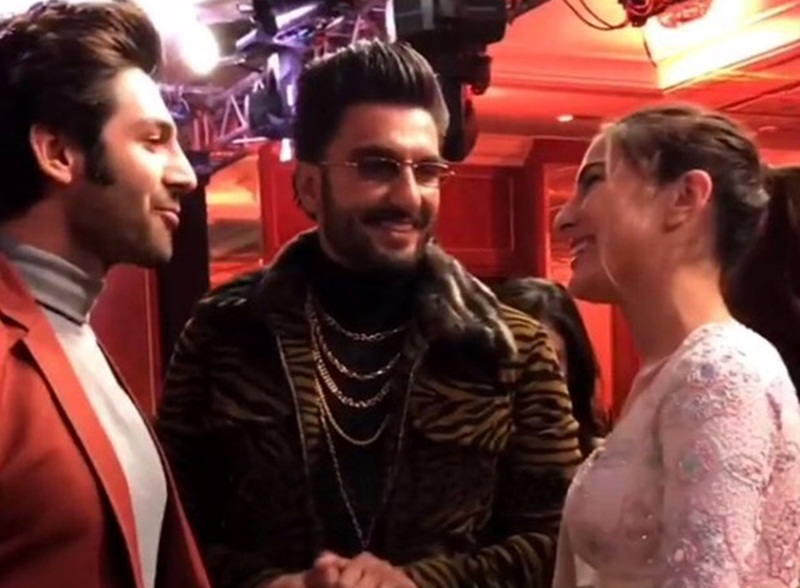 Ranveer Singh and Sara Ali Khan are running from pillar to post promoting Simmba and well, they are currently leaving no stone unturned to make sure that everyone is aware that their film is coming on December 27. The two were even present at the Lokmat Awards 2018 held yesterday. While the award ceremony was going on, Ranveer Singh made it his responsibility to make sure that Sara Ali Khan meets Kartik Aaryan, after all she has been making it extremely clear that she has a crush on him and that she would like to date him someday.

Now, it is rumoured that Kartik is NOT single. He has also admitted on going on a dinner date with Ananya Panday so if anything, he has a lot on his plate currently. But in spite and despite everything, Ranveer Singh being Ranveer Singh, took Kartik to meet Sara and had a wicked smile on his face as he introduced these two. They hugged awkwardly because well the paps were clicking them and Kartik told Sara that he will ‘see her soon’.

While Sara wants to date Kartik, she has her mind set on Ranbir Kapoor for marriage. Well, it is a pretty lofty idea because he is in a solid relationship with Alia Bhatt currently. While Sara is single currently, she is doing very well for herself professionally considering that she has only just begun. She has passed the litmus test of the box office with Kedarnath and masses love her. Her off screen persona too is delightful and that definitely helps.

Sara Ali Khan has not signed any film post Simmba because well she was busy back to back for her two debut films, unlike any other newcomer. We hope to see more of her on screen.