In his first public Satsang at Isha Yoga Center in more than a year, Sadhguru urged people to make Tamil Nadu a Covid-free state by continuing to follow social protocols and acting responsibly.

In his first public Satsang at Isha Yoga Center in more than a year, Sadhguru urged people to make Tamil Nadu a Covid-free state by continuing to follow social protocols and acting responsibly. Addressing the gathering in Tamil following cultural performances and traditional Pongal festivities at Isha's famed Adiyogi, Sadhguru spoke about the significance of the farmer's festival and said it was time to bring back natural farming practices and traditional variety of crops.

"Rice was once considered the elixir of life, but now doctors are saying it is like poison, causing diabetes,” Sadhguru told the large number of people including farmers and people from surrounding villages who participated in the Mattu Pongal celebrations at the Yoga Center.

He said that earlier we used to have 2000 indigenous varieties of rice, which has reduced to 4 to 5 lab produced varieties, which don't give much nutrients as they were developed with just larger quantities and faster yield in mind. 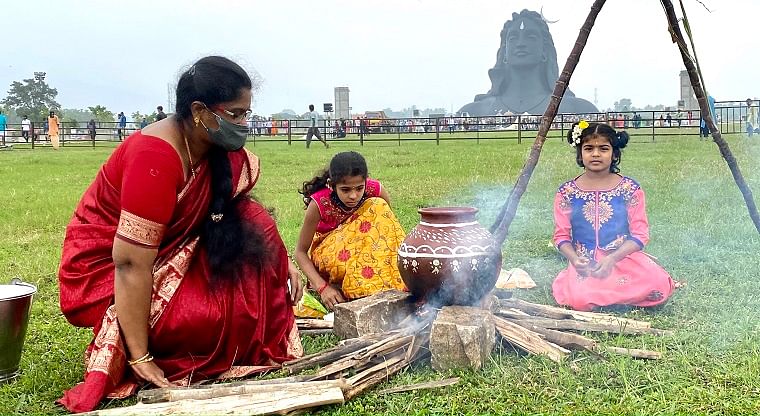 Sadhguru added that putting back organic content in the soil was critical to making farming sustainable and the produce nutritious. On his recent visit to Isha Natural Farm which grows one of the most rich and nutritious rice varieties - black rice or kavuni - Sadhguru said he found the naturally grown rice stalks exceeded 6 feet in height. He urged farmers to adopt the natural farming model which yields superior quality and quantity.

Sadhguru also spoke about the role of Yoga in enhancing physical and mental wellbeing and called on the people to commit to learning and teaching it to others. He spoke specifically about Surya Shakti, a Yogic practice that leverages the energy of the Sun to enhance physical and mental health, strengthening the heart and building immunity.

"We have about 7000 teachers to offer this practice to our people. But we need many more. All of you can learn this practice, become physically fit and offer this to at least 100 more people," he said. Sadhguru revealed that though 4200 people lived at the Isha Yoga Center, not one of them contracted the virus during the entire year. Responding to an audience question on whom to vote for in the upcoming Tamil Nadu Assembly elections, Sadhguru stated emphatically, “I don’t belong to any party. I won’t advocate who you should vote for.” He went on to add that his apolitical vote would go to that party which puts Tamil Nadu state on the fast track to development by addressing five crucial issues, i.e., revitalization of river Cauvery, promotion of natural farming in the state and establishment of high quality skill development centers for youth in all districts of TN. He said the party that restores temples as spiritual centers and gradually transfers their management to competent and responsible community members would certainly get his vote. Sadhguru’s final item on the wish list was the establishment of quality academies to improve the quality of education in government schools in Tamil Nadu. He encouraged voters to develop their own list of priorities for elected representatives and make an informed decision on voting.

Various cattle breeds including Kangayam, Ongole, Kongrij, Umbalacheri and Gir, bred in Isha were on display at the venue. The gracefully decorated cattle sported turmeric, sandalwood paste and saffron and seemed to enjoy the attention of visitors.