The singer, who rose to fame with her viral videos, called herself a 'failure'

Bhojpuri singer Shilpi Raj has shared a cryptic post on social media. The singer, who rose to fame with her viral videos, called herself a 'failure' and stated that she could not perform her duties and was confused about how to lead her life further.

On Facebook, Shilpi wrote in Hindi, "I could not do well (1) neither studies (2) nor music… what I was and what I have become, to tell the truth, today I have definitely become a puppet, who does not understand what to do (mother) Only you were the one who warned me, But, now I don’t feel like living in this world, please forgive." 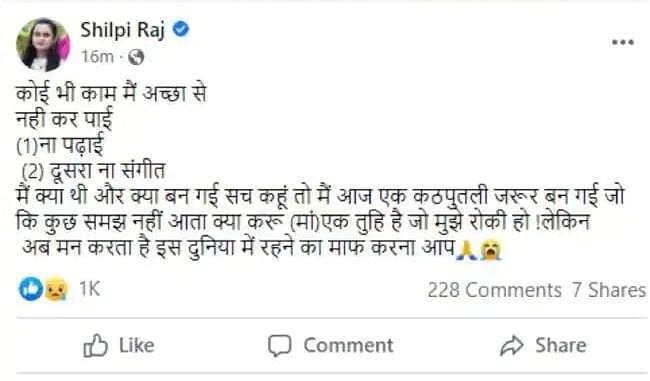 She deleted the post later. However, soon after she had shared the post, fans wondered if it a suicide note and they started reaching out to her.

Shilpi then came LIVE on Facebook to clarify that she is fine and added that she wrote the post as she was not well. According to several media reports, she also assured her fans that she would soon come out with a new song to entertain them.

Earlier this year, she was in news after a private video of Shilpi was leaked online. Reportedly, the video showed the girl in a compromising position with her alleged boyfriend Vijay Chauhan.

Owing to the controversial nature of the video, Shilpi had asked social media users to stop sharing the video.

On the work front, Shilpi has sung several Bhojpuri songs with Pawan Singh, Pramod Premi Yadav, and Khesari Lal Yadav among others.