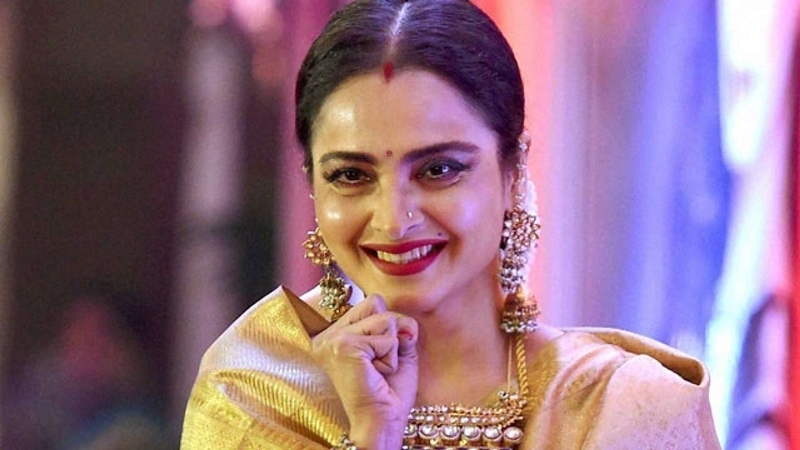 Bollywood’s ageless queen Rekha is known for her dusky yet glamorous look, terrific acting skills and outspoken personality. Rekha was one of the leading actresses of the late 70s and 80s. The actress never hesitated to take challenging roles in her career and tasted the sweetness of success. But the damsel has a dark and unique side of struggle story which can surprise everyone.

Rekha was born on October 10, 1954, to Tamil actor Gemini Ganesan and Telugu actress Pushpavalli. Rekha’s father Gemini Ganesan had 4 wives but he didn’t accept Rekha’s mother lawfully. Hence, Rekha had experienced the worst childhood. Rekha’s mother was sole breadwinner of the house, however, due to the financial crisis, Rekha had to quit school when she was in class 9 to act in films.

Rekha initially did some films in the south but when she came to Bombay to try her luck in Bollywood, she was criticised for her not so fluent Hindi language. She had to accept a lot of B-grade Hindi and Tamil film offers due to the dearth of money. But finally, in 1970, Rekha bagged her first Hindi film, Saawan Bhado directed by Mohan Sehgal opposite Navin Nischal. After the debut Rekha, she started giving back to back hits at the box office.

Rekha’s personal life has been full of ups and downs, she was initially linked with actor Biswajit. Later on, the rumour died. Later, she was also linked with actor Vinod Mehra. There were also reports stating that Vinod and Rekha got married in Kolkata. But this relationship also did not last long and eventually, it ended. Rekha was allegedly dating Amitabh Bachchan for a long time. But Amitabh was married to Jaya Bachchan and due to his marital status, they parted their ways. Finally, in 1990 Rekha got married to Delhi based industrialist Mukesh Aggarwal, however, a year later in 1991, he committed suicide while she was in the US. He left a suicide note behind, “Don’t Blame Anyone” which raised many questions in people’s mind. Sadly, Rekha still has not found her true love but the diva still spreads her magic whenever she comes on-screen.