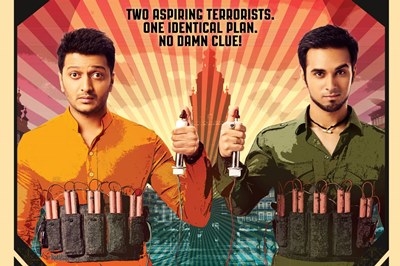 Mumbai: Comic satire “Bangistan”, starring Riteish Deshmukh and Pulkit Samrat, has been banned in Pakistan and United Arab Emirates (UAE), according to its producer. Ritesh Sidhwani said he is “shocked” to learn about the fate of the film in the these countries.

“#Bangistan banned in #pakistan #UAE I’m now told may be #Singapore as well. Can the censor boards in these countries give us a written. “Explanation clearly specifying what did they find offensive in our film… I’m Shocked as to how they have missed the message in #Bangistan,” Sidhwani, honcho of Excel Entertainment, posted on twitter.

The film, releasing in India tomorrow, is directed by debut director Karan Anshuman. Shot extensively in Poland and Ladakh, it is about two suicide bombers, Hafeez Bin Ali Ishwarchand Sharma and Allah Rakha Khan Praveen Chaturvedi, and how they eventually land up into an explosive mission. “Bangistan” also has a guest appearance by “Kick” star Jacqueline Fernandez.