How the idea of raising hand on students has generations divided

Individuals, who left their schools decades ago are not completely on board with the vilification of teachers raising their hands on students

Schools often help create numerable memories for students who spend around a decade in the corridors and classrooms of the same. Teachers and students in school often have a unique bond considering the number of years they have been in each others’ company. While there have been and still are instances of them showering their love and praise on each other, teachers beating students over discipline issues, lack of attention, and learning problems has created quite a stir among pupils, parents, and the school fraternity alike.

In light of a recent incident in Kerala, where a tutor was arrested for allegedly beating a 4-year-old student over not saying ABCD properly, The Free Press Journal talked to students and teachers from different generations on what their thoughts are on a wide range of issues concerning corporal punishments in schools.

Sadhana Deshmane, a school teacher in Dombivli, is about to retire from her profession of 30 years soon and believes that beating students over the mistakes they have made was never fruitful albeit practiced in schools to create fear in the minds of students. “Though we should not raise our hand on students, regardless of their age, it should be understood that the traditions around us have changed drastically. Earlier there was mutual respect between students and teachers so we never beat them to make them understand,” said Mrs. Deshmane, who added that the duty of the teachers on a broader level is to understand the environment they are living in. “We used to enquire about students’ families, their diet, their daily schedule so that we could have a better understanding about their mental and physical state. Now because parents and students are often at odds with teachers over a variety of issues, raising hands on them as our own kids is impossible,” added Deshmane.

While the difference between how the young and the old approach these situations might seem different, it’s not exactly as you would expect.

“Parents are possessive about their children now. There was a time when our parents used to instill fear in our minds by encouraging teachers to beat us whenever we did any mischief. It can be a bad influence on students who might not realise that there are consequences for everything,” said Pritesh Bhosale, a teacher who completed his B.Ed qualification two years ago and has just entered the world of teaching with a ‘hope to be friends with students.’ “Though raising hand on students might seem necessary sometimes, it would be better if we can view the situation from their point of view. We as teachers need to be friends with our pupils so that they are comfortable with and respect our presence. The goal is to get with the times and be relatable to them,’ added Mr. Bhosale, who teaches Marathi to students from the Primary section.

For some parents, it’s not about being possessive but protecting their children. “We as parents are more cautious now about the rights of students. We don't want them to go to schools and feel stressed over a situation where they have been slapped or worse. And teachers also realise that the interactions between them are much more positive than what they used to be during our schooling years,” added Jasmine Nainan, a parent of a student in 10th standard.

“Though I don’t think teachers raise hands on students with an ill intent and believe it’s more about the compliance of rules mandated by the schools which teachers have to follow to make sure they are followed, we are more aware of our rights now. It’s better if more positive interactions and activities between them are encouraged,” said Nihal Nainan, a 10th standard student in St. Therese Convent High School in Dombivli, who added that students are more up to date with rights provided to them through RTE and other acts due to the internet.

On the other hand, individuals, who left their schools decades ago are not completely on board with the vilification of teachers raising their hands on students. “When we were in schools in the 2000s, it was guaranteed that someone or the other would be given a scolding or a beating. It was pretty commonplace back then but it was never meant to be serious or something that could affect us mentally. It was more embarrassing that teachers were raising their hands on us in front of girls or our classmates,” said Piyush Jain, a software engineer at Microsoft who is in his 30s now. “There can be positives and negatives about teachers beating students as the latter might feel resentment and disrespect against the former but at the end of the day students will think twice before repeating a mistake again,” added Piyush who appreciated the blessing of the teachers at every step.

In India, corporal punishments in schools, daycares, and alternative child care institutions. The National Policy for Children 2013, in fact, states that in education, the state shall "ensure no child is subjected to any physical punishment or mental harassment" and "promote positive engagement to impart discipline to provide children with a good learning experience". The Right to Education Act, 2009 also prohibits corporal punishment in any form with the Ministry of Human Resources Development going as far as issuing guidance ("Advisory for Eliminating Corporal Punishment in Schools under Section 35(1) of the RTE Act 2009"), which sets out the national law against corporal punishment in schools.

Despite these rules and regulations in place, school counsellors say that beatings are not the only thing students are worried about.

“We have had many students come to us over things that have been said verbally to them. Students feel more scared about being put in the spot in front of the entire classroom now rather than being thrashed by a teacher. Cases of anxiety, and suicide have increased among students as young as 10 and it’s really alarming,” said Mansi Patel, a counsellor at a Ghatkopar school. “I think punishments can’t be extreme to the point where students start doubting themselves, especially in the age of cyberbullying,” added Mansi.

Read Also
Mirzapur school principal hangs 7-year-old upside down from balcony: Is punishment the only way to... 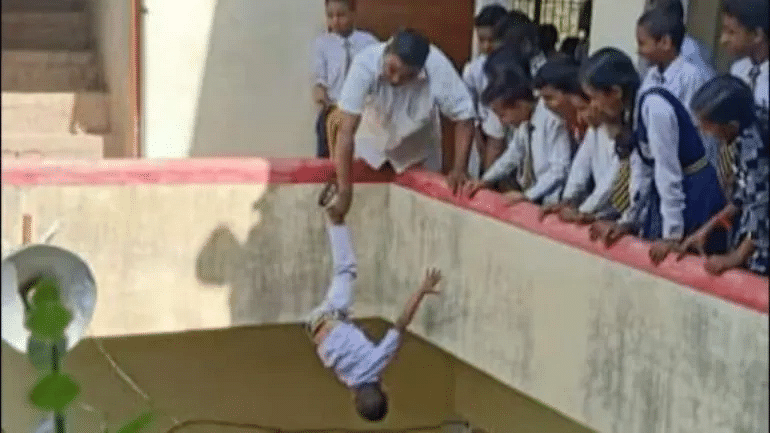 HomeEducationHow the idea of raising hand on students has generations divided