Mirzapur school principal hangs 7-year-old upside down from balcony: Is punishment the only way to make children realise their mistakes? 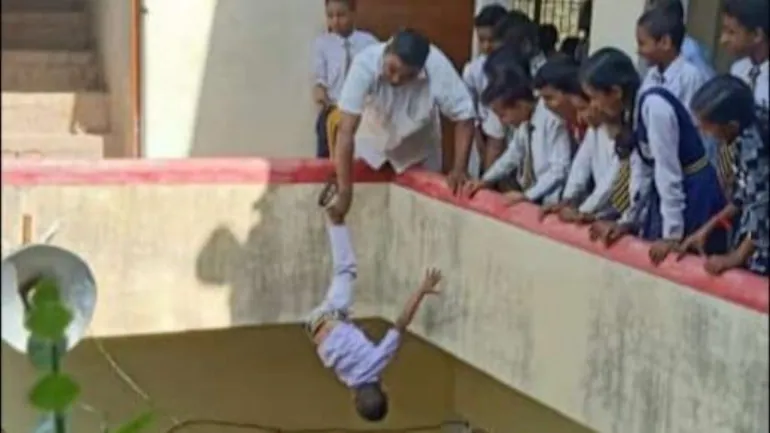 Mirzapur school principal hangs 7-year-old upside down from balcony: Is punishment the only way to make children realise their mistakes? | Twitter/@PplOfIndia

In UP, a seven-year-old boy was hanged upside down from the balcony of the first floor on Thursday by the headmaster of the school.

India has seen variation in punishments from generation to generation. There was a generation who would get neem sticks on hands and legs. Then came a generation who were given a little lenient punishment by hitting with wooden sticks on knuckles and palms. But, the scenario has completely changed now. Teachers are not allowed to beat students and it’s abided by the law.

According to section 17 of RTE ACT 2009, (1) no child shall be subjected to physical punishment or mental harassment. (2) Whoever contravenes the provisions of sub-section (1) shall be liable to disciplinary action under the service rules applicable to such person.

FPJ interacted with a lawyer to understand the rules and regulations abided by law for punishing students in the school.

“A criminal complaint can be filed by the parents or student depending upon the nature of beating and if it is excessive and makes injury to the student it can be taken under IPC 326, 504,” said Hrushikesh Korhale, a Nashik-based lawyer.

Hemal Patel of Thane who went to school in the 90s said, "We have grown up to this Gujarati saying, 'Soti wage cham cham vidya aave gham gham' which means, a student will gain knowledge faster if beaten up by sticks."

“Even for trivial mistakes, our teachers would hit us with the wooden scale on knuckles. We have had canes on our legs. We were made to run ten rounds of the playground if we get late to school. And never did my parents worry about this because according to them, a teacher is a guru, and whatever they must do with us is for our own good,” added Hemal recalling her school-time punishments.

When asked by FPJ how they punish the students for making mischieves and mistakes, Jyoti Kathar, teacher of an Aurangabad-based school said, “We never hit children. Either we explain to them where they are wrong or make them write ten times or twenty times depending on their ages, that they would not repeat the mistake again. Before joining the school, I was told to sign an agreement which stated that if I beat or hit any child, an FIR can be filed.”

Tina Shah, a mother of a 12-year-old says, “I have been a teacher in the past and am a parent now. I have always been against the concept of punishing children. Teachers can explain nicely about the mistakes students make but beating them is not the solution. It will only create aggressiveness in the minds of children. Today’s generation unlike ours lacks patience so if you scold them, hit them, they would never learn. Instead, they would get aggressive and think in a different direction.”

Hitting children or even scolding them in front of the class may create a negative impact on their minds. Dr. Shyam Mithiya, a Mumbai-based psychologist said, “It depends on teacher’s tone of scolding and child’s temperament. The child might be sensitive, introverted, or shy, and at times while teachers scold, they go far beyond the mistake of the child. They may use words like useless, shameless which could be traumatizing for the child. I don’t say that teacher should not correct the child but in a different way. It is best to call the child alone and explain to him/her its mistake and if at all the teacher says in front of the class, they should focus on the mistake and explain to the child that you are not wrong but the act you did is wrong.”

The doctor further added, “Scolding a child in front of a bunch of his peers would impact on his/her future. The child may fall into self-doubt, lack of confidence and in future, he or she may face performance anxiety.”