The Congress has questioned the timing of the project as the assembly elections in the state are scheduled in November-December 2023.

Amit Shah along with Shivraj Singh Chouhan releases textbooks in Hindi of three subjects for MBBS students. | Twitter
Follow us on

Bhopal: The Bharatiya Janata Party (BJP) ruled Madhya Pradesh has introduced the MBBS course in Hindi- a first for any state in the country, claiming the step to be revolutionary and pioneering.

However, the actual implementation would come when the fresh batch of MBBS students begins in November. Three textbooks in Hindi have been released paving the way for its implementation.

Since the day the three MBBS textbooks were released by Union Home Minister Amit Shah in Bhopal, the implementation of this project has started a debate on the entire education system in Madhya Pradesh. The promotion of Hindi through its wider use has been a programme under the BJP government at the Centre as well as in Madhya Pradesh. The New Education Policy-2020 (NEP-2020) lays emphasis on the use of the mother tongue in imparting education.

The Congress has questioned the timing of the project as the assembly elections in the state are scheduled in November-December 2023. The opposition has also questioned the implementation of the Hindi medium engineering courses. 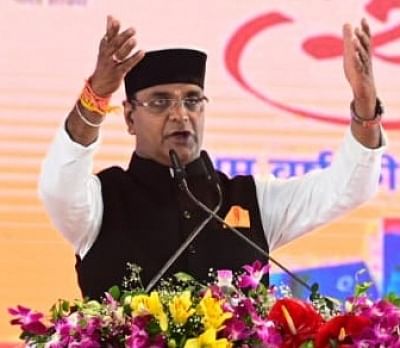 In 2016, the Shivraj Singh Chouhan-led BJP government started an engineering course in Hindi at the Atal Bihari Vajpayee Hindi University in Bhopal. Technical engineering terms were translated from English to Hindi for the purpose. The programme found few takers, and Congress claims the course has been discontinued.

Medical Education Minister Vishwas Sarang, who is monitoring the project, countered the allegations claiming that the implementation of Hindi in engineering and medical courses has put paid to the concept that technical and medical courses can only be in the English language.

"There was a fixed concept in mind that medical study can be done in English only, which has now started changing. We have introduced Hindi for engineering courses and the work is still underway, the time will come when people will accept it. These are things which cannot come overnight," Sarang said.

Dr Vijalaxmi Sadho, who was medical education minister in the Kamal Nath-led Congress government in Madhya Pradesh and is an alumni of Gandhi Medical College, on being asked whether the MBBS course in Hindi is being implemented as a pilot project, accepted that students who come from a Hindi medium background face challenges. However, she believes that the government should have laid more emphasis on improving the education system at the school level, especially in the rural areas of the state.

Talking exclusively to IANS, Sadho said, "Our basic education system is poor and therefore the implementation of Hindi or any other language would not achieve its real purpose until the children are imparted quality education. The Shivraj government said that exams should not be conducted for students upto the 9th class. Doing this you have ended a competitive system. In the rural areas, there are several students who have passed their primary level but they can't even write their name. That is why I would say that the government should focus on providing quality education, until then no concept will work."

She alleged that around 1500 primary and secondary schools were closed in the last few years. She claimed that during the Congress rule between 1993 to 2003, the state had established thousands of primary and secondary schools at a distance of every three to five km. "The Shivraj government closed over 1500 schools and now CM Rise schools are being established. There is a shortage of teachers at every school in Madhya Pradesh and the same situation prevails in government-run colleges and universities," Sadho added.

She accused the BJP government of creating a conflict between Hindi and English for its political benefit. "The BJP has been in power for the last 17 years and it never focused on improving the education system. Now, when the elections are getting closer, they are trying to divert attention from the real issues to hide their failure."

Sadho, who was also a member of the Department of Public Health in Madhya Pradesh from 1993 to 1998, said, "I accept that students who have studied in Hindi medium schools face difficulties when they come for higher education, especially in technical and medical courses, but this problem won't end with the introduction of Hindi. The only way to find a solution is to improve school education."