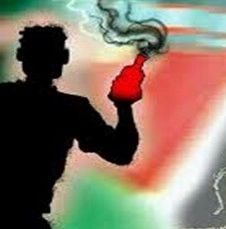 The incident took place in Vindhyanchal Express at the outer of Ganjbasoda railway station. The youth identified as Sachin Sahu has suffered severe burn injuries and is undergoing treatment at a hospital.

According to Government Railway Police (GRP) Sources, Sachin Sahu, a resident of Bhopal works with a private institution in Vidisha.

The eyewitness told GRP officials that Sahu was sitting with a woman in D-4 of the coach. He was having a heated argument with the woman over some issue. She later threw liquid on his face and escaped from there.

The face of Sahu caught fire. As Sachin was running here and there, a passenger Madan Bansal doused the fire and informed GRP personnel.

“We have registered a case and started an investigation. He has sustained severe burn injuries on face and is unable to speak, therefore his statement could not be recorded. The identity of the woman is yet to be established,” a senior GRP official said.

Bhopal: Objective of government is welfare of all sections including OBC