Rahul Gandhi during 'Bharat Jodo Yatra' | ANI
Follow us on

Bhopal (Madhya Pradesh): Congress leader Rahul Gandhi will offer prayers at the Mahakaleshwar and Omkareshwar temples of Lord Shiva in Madhya Pradesh and also visit B R Ambedkar's birthplace after the "Bharat Jodo Yatra" led by him enters the state on November 20, the party said on Wednesday.

The Congress demanded adequate security for the MP leg of the yatra citing a firing bid incident that occurred in Gwalior on Tuesday.

Notably, ahead of the November 2018 Madhya Pradesh assembly polls, Rahul had performed a 'puja' at the Mahakal temple in Ujjain before embarking on a tour of the BJP-dominated Malwa-Nimar region.

The next Assembly elections in MP are due in November 2023.

"Rahul Gandhi will worship at Mahakaleshwar temple in Ujjain and also at Omkareshwar. He will visit the birthplace of the father of constitution B R Ambedkar in Mhow and also the birthplace of tribal icon Tantya Bheel (in Khandwa)," the Congress said in a statement.

The Congress' apprehensions about security for the "Bharat Jodo" foot march stems from an incident in the Gwalior district on Tuesday wherein a man allegedly tried to open fire following a dispute with a participant in a state-level "Yatra" led by Congress leader Govind Singh.

In a statement issued on Wednesday, senior Congress leaders alleged the state government is deliberately not providing adequate security to the "Bharat Jodo Yatra" which will enter Madhya Pradesh on November 20 from Maharashtra.

In a joint statement, Leader of Opposition Govind Singh, former ministers Arun Yadav, and Jaivardhan Singh, and state media committee chairman KK Mishra stated the BJP with the help of "anti-social elements" may create trouble in the upcoming Yatra and demanded the government ensure the MP leg of the foot march led by Rahul remained peaceful.

"As a ruling party in the state, the government must ensure that the yatra completes its MP leg without any problem," the Congress leaders said.

They said the Gwalior incident occurred on a day when the Opposition Leader was taking out his yatra and state Congress president Kamal Nath was reviewing preparations in Indore.

The Congress demanded the government ensure that the law-and-order is maintained properly and anti-social elements do not join any public programme.

The Congress informed the "Bharat Jodo Yatra" will cover about 350 km in MP before proceeding to Rajasthan on December 3.

According to Gwalior Police, a man allegedly tried to open fire following a dispute with a participant in a state-level "Bharat Jodo Yatra" led by Govind Singh on Tuesday.

City Superintendent of Police Ravi Bhadoria had said a fight broke out between some youths near Baretha Toll Plaza on Tuesday evening when the 'Bharat Jodo Yatra' from Bhind to Gwalior arrived.

One of the young men later reached Laxmangarh village, where Congress leaders participating in the Yatra were staying, and tried to fire from a country-made pistol at a participant. But others present at the spot overpowered him and snatched away the weapon, the police officer had said.

A case was registered against the attacker under Indian Penal Code section 307 (attempt to murder) and he will be soon arrested, he said.

Govind Singh had said a person tried to shoot Chhotu Tomar, a participant in the Yatra, but another party worker snatched away the pistol in time.

This party worker was also injured in the scuffle, he said, adding that the incident showed how poor the law and order situation was under the BJP government. 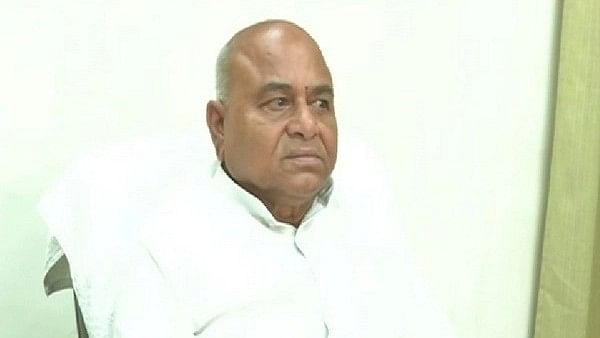