"History will not pardon traitors. Coming generations will remember the betrayers," Singh had said.
ANI 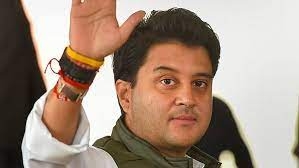 Ashoknagar (Madhya Pradesh): Hitting back at Congress leader Digvijaya Singh over his 'traitor' remark, Union Minister Jyotiraditya Scindia on Sunday said the statement of the former reflects his mental state.

"I do not want to fall to that level... What to say to those people who called Osama (Osama Bin Laden) as 'Osama Ji' and told that they will abrogate Article 370 when they come to power. What he said reflects his mental state. The public will decide as to who is a traitor and who is not," Jyotiraditya Scindia told reporters here Digvijaya Singh in a public meeting on Saturday had said that Scindia has betrayed Congress and toppled the party's government by defecting MLAs distributing money.

"History will not pardon traitors. Coming generations will remember the betrayers," Singh had said.

Congress government in Madhya Pradesh was toppled in March 2020 after 22 party MLAs resignation.