PETA-India chief advocacy officer Khushboo Gupta, to whom the forest department has entrusted the responsibility to take care of the elephant, told IANS that Laxmi has so far known only cruelty, misery, and neglect.
IANS 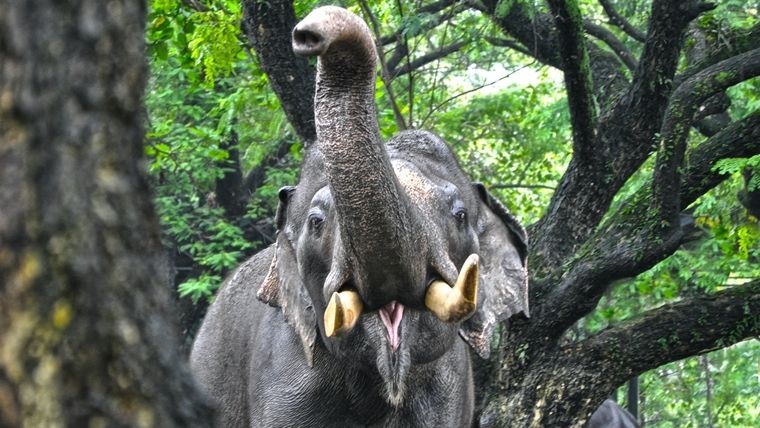 Bhopal (Madhya Pradesh): Laxmi, a 30-year-old emaciated female elephant, rescued from a group of individuals two weeks ago in Chhatarpur district of Madhya Pradesh, would need special care along with medical help to recover from multiple illnesses.

Photographs of the ailing elephant, which is currently sheltered at the forest department's premises in Bada Malhera under the observation of veterinarians and People for the Ethical Treatment of Animals (PETA) India, shows that animal is in agonising pain and is experiencing debility caused by long-term deprivation of food and water.

PETA-India chief advocacy officer Khushboo Gupta, to whom the forest department has entrusted the responsibility to take care of the elephant, told IANS that Laxmi has so far known only cruelty, misery, and neglect.

"She has suffered multiple diseases but her condition has improved in the last one week and we are hoping that she will be able to roam, bathe in ponds, and be in the company of other elephants," Gupta said.

Gupta said that the ailing elephant would need special care, at least for a few months to recover from her multiple illnesses and it would be possible when she is under the observation of wildlife veterinary experts.

The elephant was rescued while begging for food on December 1, and has been found to be suffering from chronic arthritis and joint deformities.

PETA-India had called for urgent intervention by the forest department, Animal Welfare Board of India (AWBI), and Project Elephant division of the Ministry of Environment, Forest and Climate Change.

The pachyderm is being treated for joint pain and abscesses on her hips. Deep wounds on her left ear are being cleaned and dressed. The injuries were likely to have been caused by an elephant goud or 'ankus', a hooked iron rod used by mahouts to control elephants. Laxmi was rescued by PETA activists and local residents.