Madhya Pradesh: Irked over her 'missing' posters, Pragya says Congressmen, traitors have no place in India

Congress's Bhopal South MLA P C Sharma, who was present at the programme held on Friday night where Thakur made the remarks targeted at him, left the event midway in a huff.
Staff Reporter 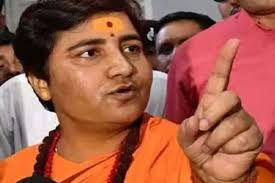 Bhopal (Madhya Pradesh): Lashing out at a Madhya Pradesh Congress legislator for the posters during the COVID-19 pandemic, which claimed that Bhopal's BJP MP Pragya Singh Thakur had gone missing, the latter has said "such Congressmen and traitors" have no place in India and only patriots will stay in the country.

Congress's Bhopal South MLA P C Sharma, who was present at the programme held on Friday night where Thakur made the remarks targeted at him, left the event midway in a huff.

During the programme, Thakur described Hindus as patriots and also took a veiled swipe at Congress veteran Digvijaya Singh, saying that no person can become pious by taking up "Narmada parikrama" (circumambulation of Narmada river).

"Animals also have feelings. When its offspring dies or falls sick, the animal cries. But they are worse than animals. Do not treat the sick as sick. At first, they tortured (me) and when I got sick, they put up my missing posters," Thakur told a gathering during the programme held on the occasion of Dussehra on MVM Ground in the city.

She further said, "Shame on such people that they become MLAs. Such people do not deserve to become an MLA, but became one. Such people call themselves Hindus, but they are insensitive. They attack us. They cry over those who kill us. Shame on such Congressmen, shame on such traitors and I say there is no place for them in India. Only patriots will remain in India." The nation is with the Hindus as they are patriots, she said.

"If the patriots understand their strength, then the country's borders will be protected, India will be integrated and country will reach its glory," she said.

Thakur also said no 'adharmi' can become pious by taking up 'Narmada parikrama', an apparent attack on Digvijaya Singh, although she did not name anyone.

The Congress leader had undertaken the 3,300-km Narmada parikrama in 2017.

However, this is not the first time that she has attacked Digvijaya Singh, who had unsuccessfully contested the election against her during the last Lok Sabha poll from Bhopal.

Congress legislator Sharma, who left the programme midway after Thakur attacked him in her speech, later told PTI, "It was a social platform and not the political one, where she made political comments. It was a Dussehra programme, but she insulted those who undertake Narmada Parikrama, whoever his target may be. This is condemnable." "She said that her missing posters were put up. The people of Bhopal were in trouble for two years without bed and injections during the pandemic. She is an MP from Bhopal and the people were demanding her to provide these facilities," he said.

When asked about her comment about the Congressmen having no place in the country, Sharma said that this will be decided by the Constitution and not by Thakur.

"Congress got Independence from the country and at that time these people were with the Britons. She is trying to vitiate the atmosphere as she is playing kabaddi and Garba after being out on bail on health grounds (in 2008 Malegaon blast case). The court should take cognisance of this," he added.

Earlier too, Thakur, who spent several years in jail after being arrested in the Malegaon blast case, had alleged that she was illegally detained and beaten up by police personnel to admit the crime.

BJP secretary Rahul Kothari, who tried to stop Sharma during the Dussehra programme, told PTI that the Congress legislator should not have left the stage.

"Why did the Congress legislator sit on stage when he felt ashamed? The Bhopal MP didn't name anybody," he said. Bhopal: Railway to resume operation of Rajyarani Express from today