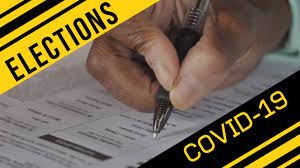 Bhopal (Madhya Pradesh): This is the first election in history of Madhya Pradesh that is being held because all four public representatives died of Covid. And ironically, the bypolls in four constituencies are being held under threat of third corona wave.

Activist Ashish Pratap Singh, who filed a petition in Gwalior bench of Madhya Pradesh High Court, to ban political activities in wake of Covid pandemic on September 11, says elections should not be held unless 100% voters are fully vaccinated.

“Government data shows that numbers of recipients who received both the doses of vaccine is quite less that makes them vulnerable to pandemic,” said Ashish. Though corona vaccination status of people is not available constituency-wise, the figures shown district-wise on CoWIN portal suggest vulnerable population is over 20%.

State government had claimed to achieve 100% vaccination (which means that both doses of vaccine will be administered) target by September 27. But the target has not been met till date.

The High Court has given directions to collectors and SPs to lodge FIR against organisers if they breach corona guidelines- including inviting people more than prescribed limits. “But everybody knows that rallies were organised , corona spread and competent authorities were not held accountable,” added Ashish.

Vaccination status (according to CoWIN portal)

Alirajpur district: It covers Jobat assembly constituency, has 91,290 fully vaccinated people (have received both doses of vaccine). The portal shows data of district and not of assembly. Jobat assembly has total 2,75,279 voters. This paints a scary picture as threat of corona third wave looms large.

Raigaon assembly constituency: Has 2,07,435 voters. It is in Satna district where 3,18,381 voters have been fully vaccinated.

Representatives who died due to Covid Odisha bypolls: Counting of votes begin; BJD candidate leads after first round of counting in Pipili...