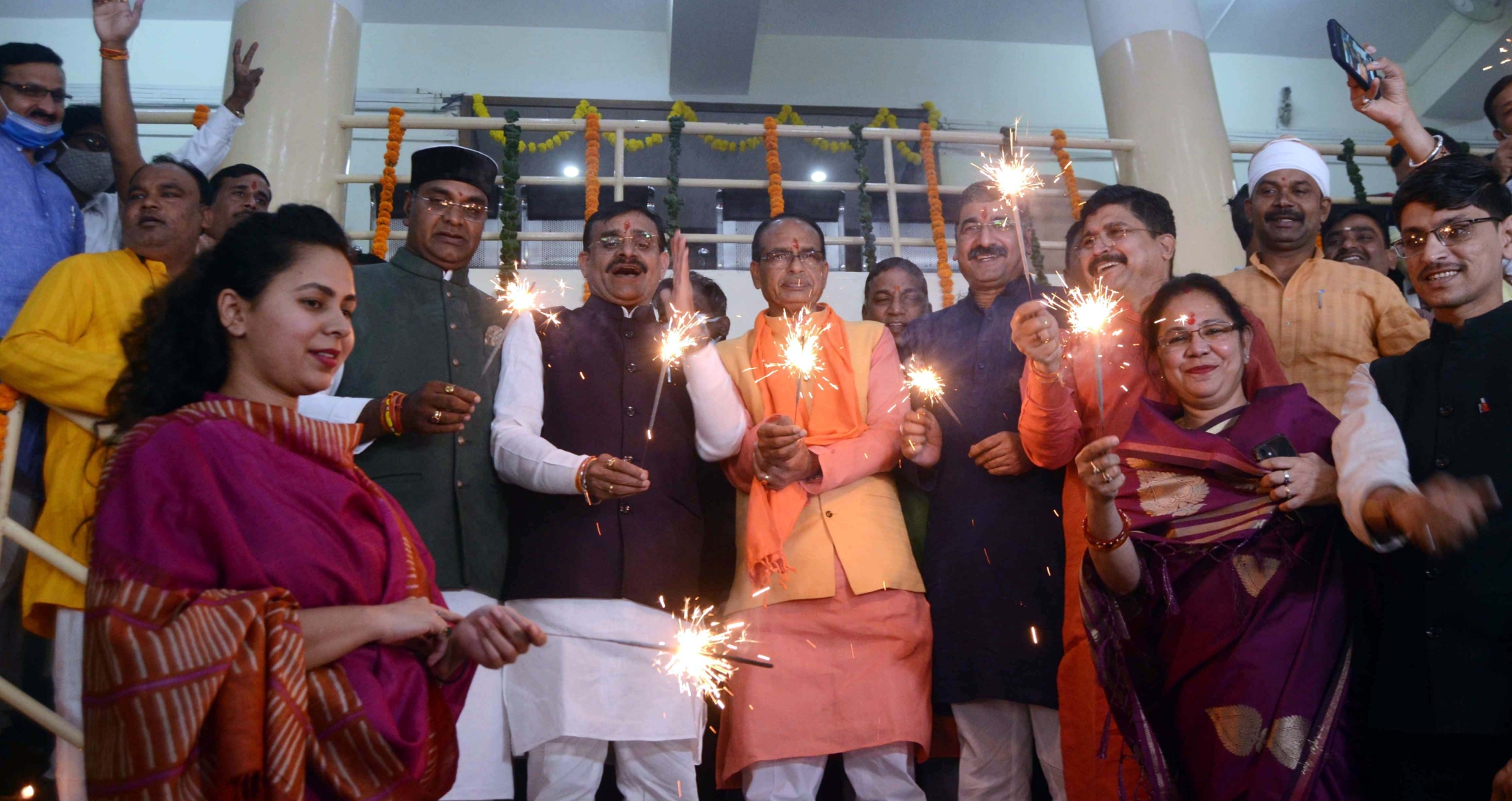 Bhopal: BJP workers and leaders celebrated Diwali ahead of the festival day on Tuesday as the party defeated Congress in Khandwa Lok Sabha and Jobat (ST) and Prithvipur assembly constituencies in bypolls results of which were declared by Election Commission of India (ECI) on Tuesday.

However, while the party retained Khandwa and snatched Jobat and Prithvipur seats from the Congress it lost its seat Raigaon (SC) to the Opposition Congress.

Bypolls to all the four seats were necessitated due to the death of the sitting MP from Khandwa and sitting MLAs from the three Assembly constituencies due to Covid-19.

In Khandwa, the BJP candidate Gyaneshwar Patil, an OBC face defeated his nearest rival Congress’ Rajnarayan Singh Purni by a margin of 82,140 votes. Patil secured 6,32,455 votes against Purni who polled 5,50,315 votes in a keenly contested bypoll.

Earlier, Patil’s candidature came as a surprise in the political circles as the party overlooked the claim of Harsh Chauhan, son of late Nandkumar Singh Chauhan whose death necessitated the bypoll in the constituency and thus decided not to go for any sympathy factor.

However, the margin of victory was greatly reduced this time for the BJP. Riding a Modi wave the BJP had won the seat in 2019 with a margin of 2.73 lakh votes.

Rawat, an ex-MLA, switched over to the BJP from the Congress just ahead of the bypolls while Congress leadership took its own time in selecting the candidate for the seat.

Like Rawat in Jobat, Yadav switched over to the BJP from Samajwadi Party ahead of the bypolls. In 2018 assembly elections, Yadav was the runner-up having polled more than 44,800 votes while the then Congress candidate Brajendra Singh Rathore was winner with more than 52,400 votes. Then, the BJP was at the fourth position. BSP candidate had polled third with more than 30000 votes.

However, Raigaon (SC) seat prevented the BJP from having a clean sweep in the bypolls. The seat being represented by the BJP for the past more than 3 decades went to the Congress on Tuesday.