While party president JP Nadda latched on to a report on Chinese donation to Rajiv Gandhi Foundation at a virtual rally, the BJP members in Madhya Pradesh were busy studying the nuances of Jyotiraditya Scindia's presence by his side.

"I saw television and I was shocked and surprised that the People's Republic of China and Chinese Embassy gave $300,000 to the Rajiv Gandhi Foundation in 2005-06," Nadda said addressing the party's virtual Jan Samvad rally from Delhi.

Nadda's assertions on donations made to RGF in 2005 may or may not translate into electoral gains for BJP in the bye-elections for the 24 assembly seats a couple of months later. But Scindia's drooping brand value got a booster in being seen by the party president's side on Thursday.

Ever since Scindia left the Congress to join the BJP, the Kamal Nath camp has been suggesting he had compromised his stature in the political hierarchy. The BJP asked its local unit to highlight Scindia's presence with Nadda as a fitting reply to Kamal Nath and Digvijaya Singh camps.

Chief Minister Shivraj Singh Chouhan, who was away in Tirupati, made it back to Delhi to join the rally. Chouhan's supporters and the Congress members who had joined the party along with Scindia tried to publicise the "honour conferred on Scindia in his new party".

Missing pictures from the election hoardings in the Malwa region and subsequent placement alongside the junior members like Kailash Vijayvargiya's son Akash had caused considerable damage to Scindia.

Another image of a former minister, Prabhulal Choudhary, being offered snacks on a disposable paper plate while his BJP host partook food with him in a stainless steel salver was uploaded on the social media to show the caste discrimination against new members from Congress.

Thursday's media blitz was to undo the damage and to affirm the rising stock of Scindia and his supporters after his recent election to the Rajya Sabha.

Large-scale preparations were made for it. Chouhan had appealed to supporters and workers to join the rally. A campaign for the rally was organized on social media also.

Much of what Nadda "disclosed" was already in the public domain before the rally. Nadda tried to add a few sentences in support of Scindia. He said it takes courage to take bold decisions in politics and to stand with the right and Jyotiraditya Scindia showed that courage. Nadda said the agenda with which Kamal Nath and Rahul Gandhi formed the government in Madhya Pradesh was blurred by the rising corruption during the 15-month regime.

"Scindia had to take some hard decisions to guard his own honour and to save the state from the misrule of Congress. People in Madhya Pradesh will soon realise the value of what Scindia has done for them. The BJP president has just acknowledged that," said a former MLA who has switched sides three months ago. 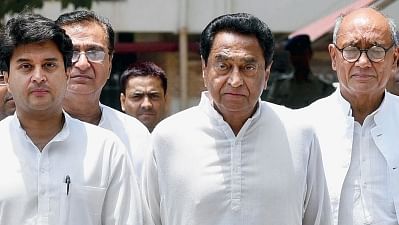